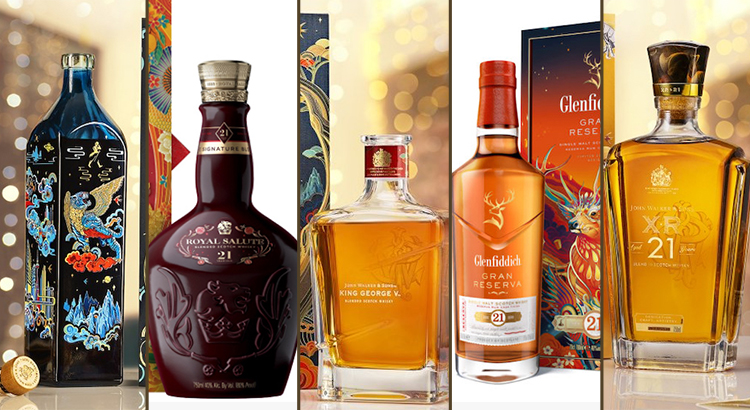 As a way of celebrating the spirit of the Chinese New Year, a number of whisky labels have developed special variants of their offerings that showcase themes tied to the holiday. The ones presented below for your consideration all have special illustrations and images, designed by Chinese illustrators and artists, that highlight these themes. They all offer a perfect way to toast the Year of the Tiger.

The Johnnie Walker Blue Label Year of the Tiger bottling is the only one on this list specifically having this year’s Chinese New Year animal, the Tiger, on the packaging. It is your typical Blue Label blend, bringing together a well balanced mix of grain and malt whiskies from open and shuttered Scotch whisky distilleries under Diageo ownership. This special variant sports a striking bottle design intricately illustrated by Chinese artist Shan Jiang. The tiger, it is said, is a symbol of great confidence and bravery, celebrating progress and prosperity.

Diageo notes of this whisky in official tasting notes that the smell is “waves of spice [that] give way to honey,” the taste is “caramel and hazelnuts [that] course through dark chocolate” and the finish is “luxuriously long, warming, smoky.” 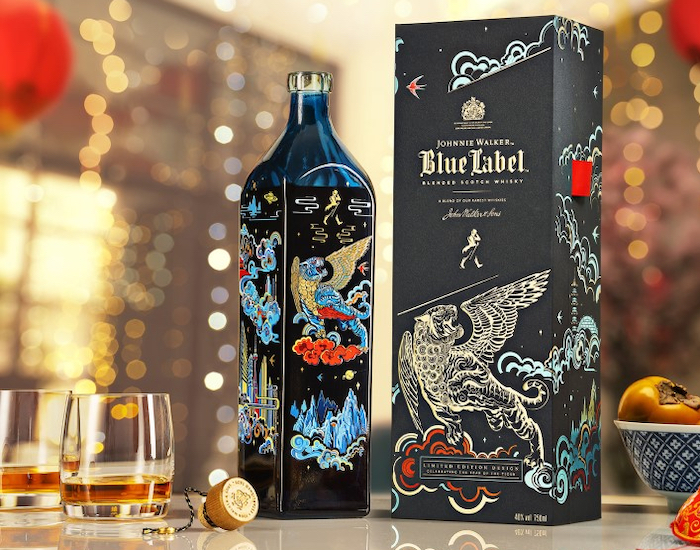 Royal Salute is a popular Scotch blended whisky produced by Chivas Brothers/Pernod Ricard. It was originally launched in 1953 in tribute to Queen Elizabeth II on the day of her coronation. This Chinese New Year variant sports the same blend of whiskies as the flagship 21 Year Old, with this particular offering featuring “a stunning array of symbolic elements including lanterns, firecrackers and plum blossoms, to bring you and your family fortune and prosperity in the coming year.” The design was crafted by multi-award-winning Chinese illustrator, Feifei Ruan, who is based in New York.

Official tasting notes for it indicate it is “bursting with flavours of ripe fruits, autumn flowers, hazelnuts and a hint of sherry spice.” 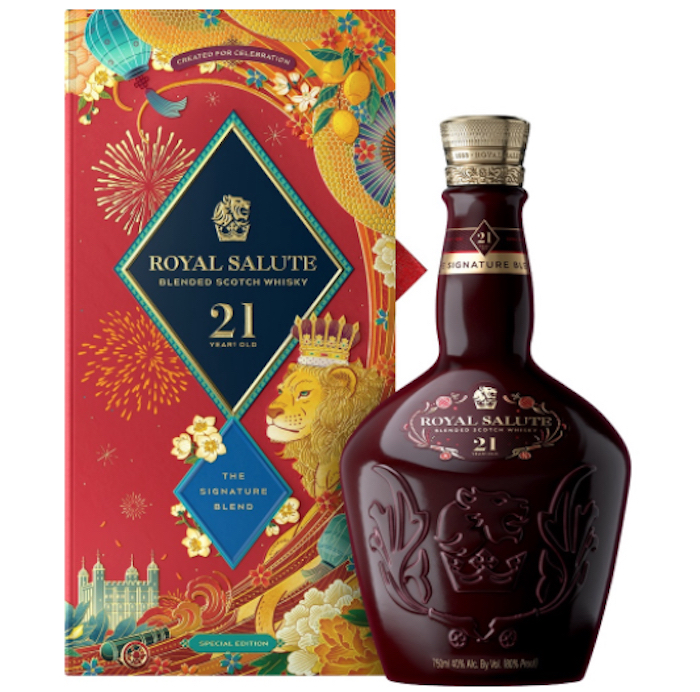 Johnnie Walker’s John Walker & Sons King George V typically represents a higher end bottling in this brand’s stable of various expressions. It was created to celebrate King George V, the monarch who granted Johnnie Walker its first Royal Warrant in 1934. It is blended from distilleries that existed during his reign, and includes some of the rarest of whisky reserves from the likes of Port Ellen.

For this Chinese New Year variant it sports a design created by Chinese artist Shan Jiang that “features a stunning illustration of the Bai Ze, a mythical creature that symbolises virtuousness, nobility and protection from evil.” Official tasting notes make mention of a smell of “sweet, smoky aromas from Port Ellen [that] greet you. It’s followed by notes of orange, raisins, figs and cinnamon”; a taste of “abundant spice and dried fruits from Speyside and Highland whiskies [that] are perfectly balanced with vanilla. They release layers of sweet fruits, dark chocolate, toffee and roast nuts” and a finish of “Port Ellen [that] gives a coastal smokiness that gathers momentum through the long finish.” 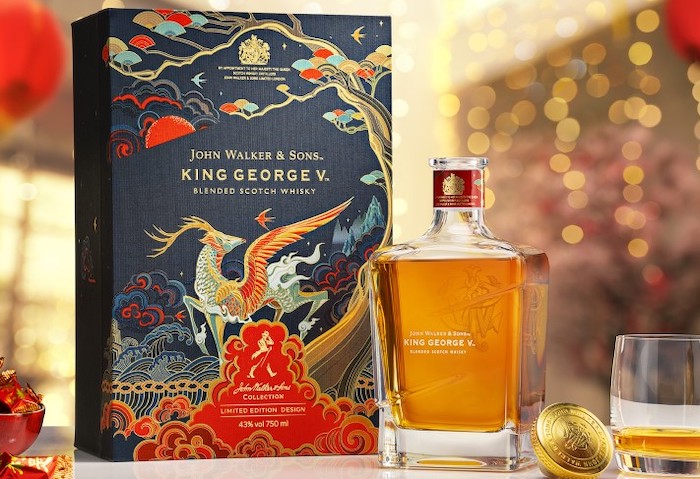 Glenfiddich’s contribution to the Chinese New Year selection of whiskies is a 21 Year Old Gran Reserva, essentially being aged for 21 years before being finished for a time in ex-Caribbean rum casks. It is described as being the final release in a trilogy of Chinese New Year offerings, with this particular release sporting a beautiful stag design from Chinese artist Rlon Wang.

Tasting notes for this suggest “aromas of intensely oaky vanilla, floral banana, toffee and leather that fill the nose. The palate offers notes of ginger, baking spices, peppery oak, vibrant lime and just a hint of smoke that linger in the finish.” 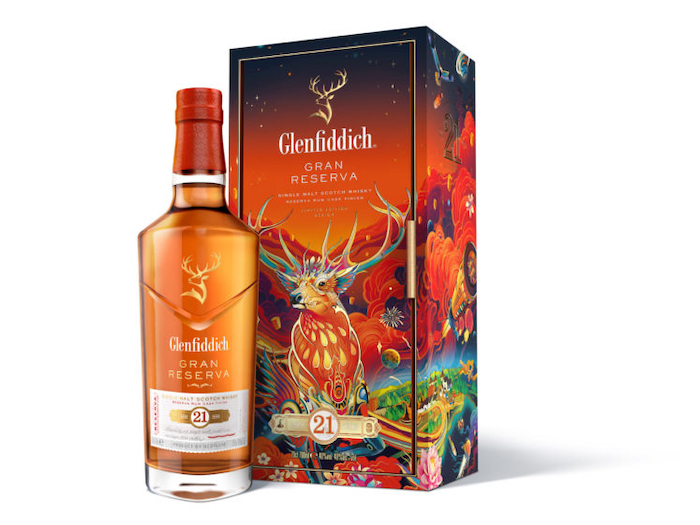 Johnnie Walker’s John Walker & Sons XR21, like King George V above, is another higher end release under the Walker portfolio. It is crafted in honor of blender Alexander Walker II, who was knighted by King George V in 1920 “for his services to the nation.” Said to be inspired by his own hand written notes, it is blended from a mix of Walker whiskies “all of which have been matured for a full 21 years.”

The Chinese New Year variant sports intricate illustration from “Chinese artist Shan Jiang, paying homage to the well-known Chinese idiom Master of the Pen and Sword; the key attributes of any great leader, brains combined with brawn.” Official tasting notes reference that “sweet honey and tempered spices come cloaked in warming smoke. Citrus zest, ripened tropical fruits and caramel swirl within hints of tobacco and raisins. The long, smooth, soothing finish is complex and fascinating – a myriad of influences played out over a subtle tapestry of peatiness.” 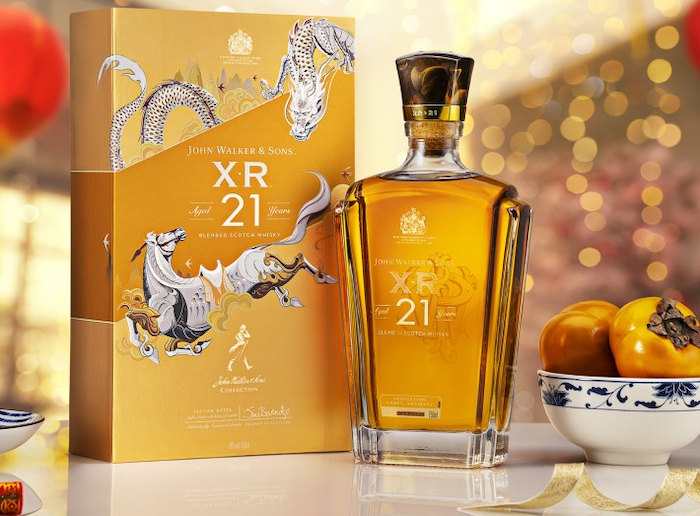