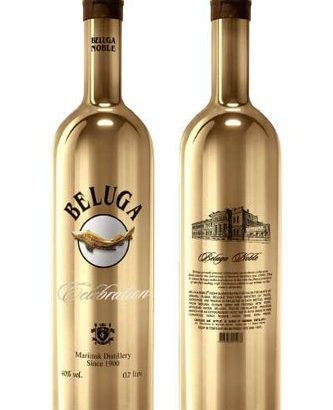 First launched exclusively in Selfridges UK in January, the celebratory design will be rolled out to other high-end Australian retailers such as MyBottleShop in May 2016.

The bottle is made using ‘thermal evaporation’ – a double platinum coating is applied to the bottle inside a vacuum chamber to create a uniform metalised layer, before the bottle is coated in a layer of gold lacquer.

The exterior is decorated using screen printing and the Beluga symbol is applied by hand.

“We wanted to create a unique product inspired by the amazing history and tradition of the Mariinsk Distillery as it celebrates its 115th anniversary,” said Katerina Mechetina, Beluga Vodka brand director.

“Celebrating the anniversary of this legendary distillery, which passes on its traditions from generation to generation, was a great occasion for creating the Beluga Celebration.

“As this is a limited edition bottle, it is aimed first and foremost at Beluga connoisseurs and collectors and customers celebrating important achievements.”

To be among the first in Australia to have a bottle PRE-ORDER HERE.