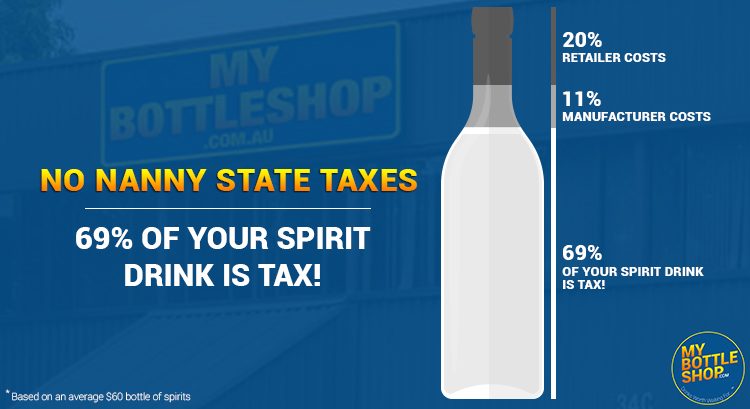 Australia has the highest liquor tax excise in the world. The rate in Australia is about $85 per litre – twice as much as New Zealand and 10 times the USA rate!

The global whisky market alone is expected to be worth more than $10billion AUD by 2023 and sales are growing fastest in the Asia Pacific region so there’s an export opportunity for small Australian producers. But sadly this job producing opportunity is being crushed by the stifling liquor taxes imposed by the Australian government.

In an average $60 bottle of spirits, up to 69% of the cost of the bottle is government taxes that include 10% GST, Liquor Excise, Customs Duty and Import taxes.

The ATO website explains that the alcohol excise is expressed per litre of alcohol for alcoholic beverages.

The volume of alcohol subject to excise duty is calculated by multiplying the actual volume of product by its alcoholic strength. Gin and whisky strength can hover above 40 per cent.  Excise rates rise twice a year in line with the Consumer Price Index (CPI), generally in February and August each year