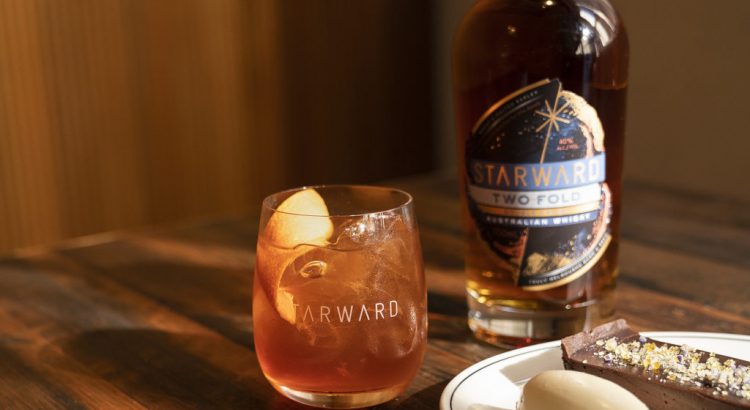 The result is an approachable, every-day whisky, providing bartenders the means to affordably mix and create premium cocktails using an Australian product.

“I started Starward with a simple vision; offer the world a distinctly Australian whisky unshackled from tradition,” explains founder David Vitale. “We mature our whisky in red wine barrels to create a bridge for wine drinkers to discover whisky in an approachable and accessible way. We felt it was important for us to create a flavour-full but easy-drinking and approachable whisky that talks to the place it is made, like very few whiskies can.”

According to Starward, stock constraints have meant that Australian whisky hasn’t thus been able to capture the imagination of a global audience. Two-Fold forms part of Starward’s ambition to carve out a space for Aussie whisky on the shelf of every self-respecting bar in the world.

“We all have a ‘special occasion’ whisky cabinet which is over-flowing with options, but the ‘sharing cabinet’ is tightly curated,” says Vitale. “We believe we have an opportunity to elbow out some space and create an alternative to the great whiskies from around the world with an Australian whisky, matured in Australian wine barrels.”

The use of wheat alongside malted barley has produced a lighter style of whisky, enabling the wine barrel influence to be more pronounced; soft aromatics of red fruit and warm vanilla spice are evident on the nose, balanced with a bright tropical fruit character and rich mouthfeel on the palate.

SouthTrade International managing director Ray Noble – who distributes Starward in Australia – says that the launch of Two Fold brings it another step closer to being the “most talked about” Australian whisky.

“For bartenders, it creates the opportunity to offer consumers affordable, yet premium cocktails using locally crafted spirits. For consumers, Two-Fold allows them to enjoy a distinctly Australian whisky at an affordable price point, whether that be in bars or at home.”

As part of its development, Starward has also redesigned two of its core expressions and renamed its signature Wine Cask expression, now called ‘Nova’.

“We felt it was important to give each of our whiskies a personality that reflects the liquid in the bottle and provide an architecture for the range to grow,” explains Vitale.

“We think it’s fitting for the leading Australian whisky, that has received international accolades including Best Craft Distilled Whisky in the world, to have a name that calls out its status as a beacon of Australian whisky – Nova means bright star.”  Starward Two-Grain Whisky is available at Australia’s #1 Independent Australian whisky retailer for $69.99.