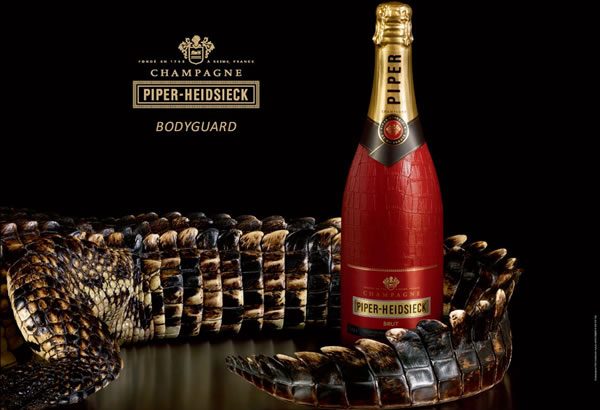 According to the following article in today’s Sydney Morning Herald, men outnumber women as the biggest consumers of Piper-Heidsieck champagne. And in a move which sees the family-owned and oldest French house take centre court they’ve teamed with the 2019 Australian Open to seduce the upper millennial gent.

Piper-Heidsieck is the first champagne brand to partner with the AO and enters the market exclusively and another win for Benoît Collard, the Executive Director for Piper-Heidsieck. In just four years at the helm, he’s taken the champagne label to the Academy Awards and the Cannes Film Festival too.

“Part of my role is to keep rejuvenating the brand,” says Collard who is no stranger to Melbourne’s scene. He did after all undertake part of his MBA at Melbourne University some 20 years ago, and prior to starting at Piper-Heidsieck worked closely with wineries in the Yarra Valley which saw him visit up to three times a year.

“As a champagne brand, the lifestyle of Melbourne and the Australian Open speaks to our consumer so it made sense to do this.”

With more than 52 per cent of men preferring the brand to 48 per cent women, it wasn’t the company’s intention to lure so many men it’s way.

“We’re about finding new consumers and educating them,” says Collard of this fascinating insight.

“Generation X has grown up and kept on drinking champagne in Australia, but we’re seeing growth driven by upper millennials and they’re at the tennis and it would remiss of us to not join in.

“Men also like to buy champagne for a celebration, an executive meeting or simply to get together with a significant other,” he adds.

“Taking them on the champagne journey is the ultimate upgrade.”

Piper-Heidsieck has long been associated with the art of seduction – it’s premium gold and red brand has wooed everyone from Marie Antoinette to Marilyn Monroe.

They were the first champagne house to have fashion designer Jean Paul Gaultier design a bottle for them in the 1990s and more recently in 2011 (think fishnets and latex on a bottle). Later Viktor & Rolf and Christian Louboutin did the same for a limited-edition brut cuvee fling.

“I am always looking for new luxury fashion labels to associate with – that story is not over yet,” says Collard.

“Christian Louboutin and Jean Paul Gaultier might be known for women’s wear and women’s shoes, but they delve into the men’s space and it’s a perfect association for us to continue if we can,” he adds.

A toast to the stars

By the time the Australian Open comes to town, Collard is hoping to bring with him some exclusive Piper-Heidsieck bottles of champagne – much like the magnums that are now collectable which debuted at the Oscars in January this year.

“At the Oscars we decided to pay tribute to the outstanding world of cinema by creating a unique bottle to be offered exclusively during the ceremony,” says Collard.

“It would be a natural fit for us to reinforce our presence and demonstrate our unique bond with the Australian Open by creating a limited edition for this event.”

Fruits of the city

But more than just being about Melbourne, Piper’s presence is about reinforcing to the city’s international and interstate visitors the importance of a descent glass of champagne.

According to Collard, it’s the rise of bistronomy in Australia that’s seeing champagne take centre stage again. We’re greater consumers of the drop over France, but leading the pack is the USA and Japan.

“Gastropubs and bistronomy has a lot to do with living a certain lifestyle and a city like Melbourne where food culture is huge it’s the perfect fit for us,” says Collard.

“Melbourne seduces on many levels, it’s an experience we all want to have and now you can with a glass of Piper.”
Article by Jane Rocca Executive Style, Sydney Morning Herald 02/08/2018