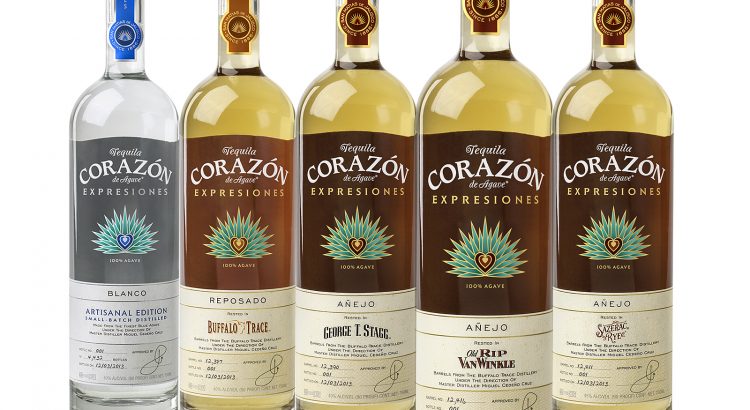 “What if you were to take bourbon barrels that have held some of the most coveted and highly awarded whiskies in the world – George T. Stagg, Old Rip Van Winkle, Sazerac 18 Year Old and Buffalo Trace, and age tequila in them?  Even better, what if the Master Distiller who created these fine whiskies hand selected these barrels based on his knowledge and expertise of terroir and barrel aging?”

That’s the come-on for this bold experiment in tequila-making, the first ever (to my knowledge) attempt to take high-end tequila (Corazon) and put it in barrels used to make high-end Bourbon (a variety of highly coveted bottlings). (Tequila is typically aged in ex-Bourbon barrels but no one ever says what Bourbon, likely because it’s the cheap stuff.)

Crazy idea, right? Well, here’s how it turned out. We sampled all five bottlings. All are 40% ABV except the Sazerac expression which is 45% ABV.

Expresiones del Corazon Artisanal Edition Small-Batch Distilled Blanco – The baseline, unaged and just for fun, really. Racy, peppery agave on the nose. Smells like it’s going to be harsh. It’s not. The blanco goes down super smoothly, exhibiting notes of lemon, mint, and lightly bitter herbs — almost a bit like an absinthe. One of the least-sweet tequilas on the market, this dry spirit is crisp and clean yet more suited to mixing. B+

Expresiones del Corazon Buffalo Trace Reposado – Aged 10.5 months in ex-Buffalo Trace Bourbon barrels, giving it just a hint of color. This starts things out easy — Buffalo Trace is hardly swill but it’s not on the top shelf — and again it sets a kind of baseline. The whiskey barrel aging adds sweetness and honey notes, while that dry finish is still there. A winner, but nothing that’ll bowl you over. Try it with chocolate. A-

Expresiones del Corazon George T. Stagg Anejo – 22 months in George T. Stagg Bourbon barrels. Still very pale, you’d never guess this was an anejo. Not much of a nose — lemons, some marshmallow — but the body is a standout. Rich caramel notes prove this anejo all the way. Sweetness balances out the dry, vegetal notes of the blanco, giving this a lovely finish. Not overly complex, but very enjoyable and easygoing (pretty much the opposite of Stagg itself). A

Expresiones del Corazon Sazerac Rye Anejo – 24 months in Sazerac Rye Whiskey barrels. Again, very light. Hotter, at 90 proof, a curious decision. The extra alcohol alone makes this more of a “real” tequila, with more pronounced agave notes and a bit of burn on the back end. There’s modest barrel influence here — the overall effect is more like a reposado than an anejo — with a bit of butterscotch on the finish. Quite lasting. One of my favorites of the bunch, but maybe that’s the alcohol talking. A

Expresiones del Corazon Old Rip Van Winkle Anejo – 23 months in the wood of Old Rip Van Winkle Bourbon barrels. In case I have to say it: Very little color here. Finally, some whiskey character comes shining through. Distinct, almost rough grain on the tongue — not really like Van Winkle — I’m not sure the balance is right on this one. There’s no shortage of character here: Caramel, black pepper, nuts, wood on the finish… but the whole affair is a little messy. Almost like a tequila + whiskey cocktail of some fashion. In fact it calls out to be blended with something. I’m just not sure what. But hey, at least if you can’t find an actual bottle of Van Winkle to buy, you can buy one of these instead. B

This article sourced from Drink Hacker