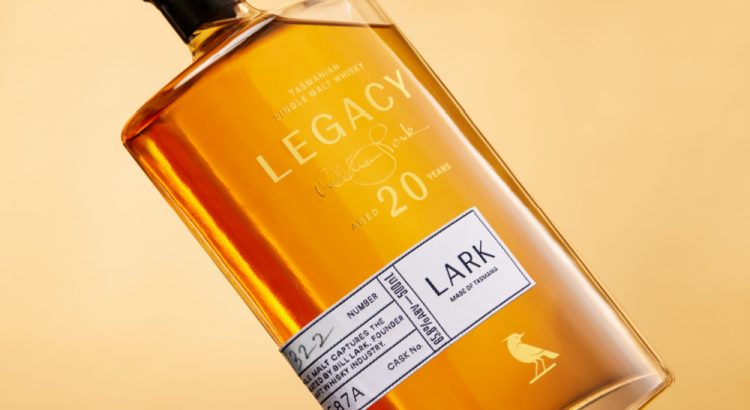 Lark Distilling Co’s Legacy, its most significant release in 30 years, is set to be released and whisky lovers can join a waitlist to purchase one of just 322 bottles produced from Monday, 21 March at 9.00am.

Aged for 20 years, this whisky represents the legacy created by Bill Lark when he founded Australia’s craft spirit movement in Tasmania three decades ago.

Bill Lark, founder of Lark Distilling, talks about the iconic status of Lark’s Legacy: “To be able to celebrate both the second Legacy release and 30 years of Lark is a huge achievement for the whole Lark team. It’s a phenomenal milestone and we are very proud of the hard work and dedication that has been put in to produce such a quality release.”

To taste, Legacy is rich, deep and perfectly complex, finished with oak and spice, as well as long viscous malt and hints of black pepper. The release pays homage to the skill and craft that Lark brings to Whisky making in Australia. This once in a lifetime release is a whisky destined for the collector’s cabinet, and to be enjoyed on life’s most special occasions.

With only 322 bottles available and selling for $2499 a bottle, this exclusive single malt is rich and sweet on the nose, with hints of caramelised pear and vanilla custard, before sweet notes hit the palette of cherry pie, maple syrup and candied orange.

Head Distiller Chris Thomson says, “This whisky recognises the 20 years of whisky making in Tasmania. For a whisky enthusiast like myself, and for those who have a passion for whisky, this Legacy series is a unique tribute to the history and significance of whisky-making not only for Lark but for Australia. Hallmarks of sherry and citrus notes ping around the palate, while 20-year-old spirit rises off your tongue, which has created something that feels and tastes very special.”

Those interested in purchasing their own bottle of Lark Legacy HHF587A can join the waitlist to receive exclusive updates on this very special release here.