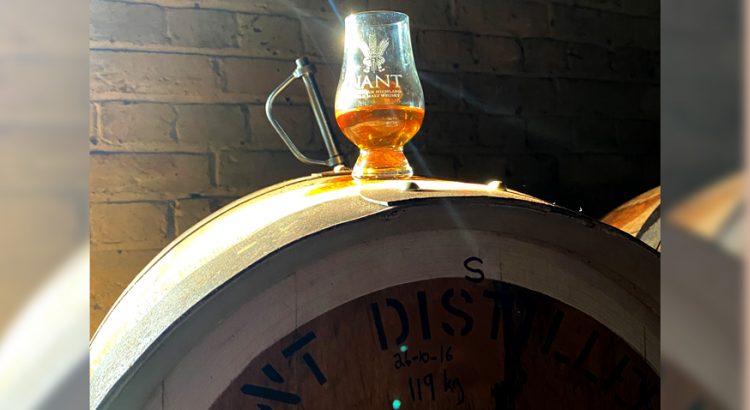 It’s perhaps an hour’s drive up the main highway towards Launceston where you take the turn-off that takes you through the beautiful Tasmanian central highlands towards Bothwell. Bothwell is a quaint and tiny town with about 300 residents that sits on the gorgeous river Clyde. The town has a distinctive colonial feel with many heritage-protected buildings including those at the Nant Distillery.

For those interested in golf, Bothwell is home to one of the oldest golf courses in Australia at Ratho. Laid in the mid-1830s, the course has square putting greens and fairways maintained by grazing sheep. You can even play a round with traditional hickory clubs.

Turn right off the main street and 2 minutes later you’ll find Nant Lane and the entrance to the distillery. At first glance your thoughts will turn to the beauty of the location and the ancient buildings on the distillery grounds. There is a stately old house full of possums, some stables that double as the bond store and the mill that houses the distillery operations.

Upon arrival I am met by Distiller Ric who comes bounding out of one of the outbuildings. Ric is best described as a tatooed, ex-special forces dude and at first glance you might duck for cover. But upon greeting Ric you can see that he is the friendliest most approachable guy. He takes me straight over to the distillery operations in the old Mill building.

The very first thing I see is an wooden mash tun with fresh grains lined up ready to go in. This tells me straight up that, unlike some Tasmanian distilleries, Nant is making their own wash (i.e. the beer from which the whisky is distilled). I meet Samantha the brewer and her faithful distillery dog Rua, a New Zealand Huntaway, who doesn’t seem to mind my intrusion into her zone.

Ric and I pass by the 2 Tasmanian copper pot stills, a 600 litre spirit still, and the larger 1200 litre wash still. I quickly taste some of the clear new make coming off the spirit still and attest that yes it’s good! We quickly pop out the front to the water-operated mill and give it a bit of a test run. Yes still working perfectly without energy use even after 150 years.

Now I guess is the time to cross the bridge over troubled waters because many whisky types will know that Nant has had a bit of a chequered history. But to be honest, though I am not going to rehash rumour and innuendo but rather focus on what the Nant Distillery is doing right now. From everything that I can see, the past with Nant and Australian whisky holdings is very much in the past. Nant is now wholly owned by Lark Distillery, a Tasmanian spirit producer listed on the Australian stock exchange (ASX:LRK). While some of the whisky finds its way into Nant bottles, a lot is also sent off to Lark for special releases and for mixing in the affordable (by Australian standards) Lark Symphony Blended Malt Whisky.

As Ric and I now head into the dusty and dank bond store building, I can see this very old convict-era building used to be what seems was an old horse stable. There are barrels everywhere and we go scouting for some different barrel types to do a tasting straight out of the barrel at, yep you guessed it, cask strength (i.e. not diluted with water before bottling like most whisky).

Ric and I scout out some different barrel types – sherry, port, deep char, American oak, French oak and ex-bourbon barrels. Many appear to have been ageing at least 5 years old. I have a tiny taster of a few different barrel types and settle on two 200 litre 6-year-old sherry barrels that interestingly are both near the window. I personally think the whisky from these barrels is fantastic and as decanted would hover around the 60% ABV (alcohol by volume) mark at cask strength. The flavours are sweet candied toffee apple with long legs snaking down the glass and a dark crimson red that defies the relative youth of the whisky – although right now in Australia, it’s honestly very hard to find a whisky with more than 5 years of age on it.

The day is getting on and as much as I would love to stay longer, it’s back on the road again. Ric kindly allows me to take a small sample bottle to share with the rest of the team at MyBottleShop.com. All up it was a friendly, informative, and tasty tour of what is a genuine hard-working distillery set in the most beautiful countryside you can lay your eyes on.

Thanks to Lark Distillery for allowing this impromptu visit.