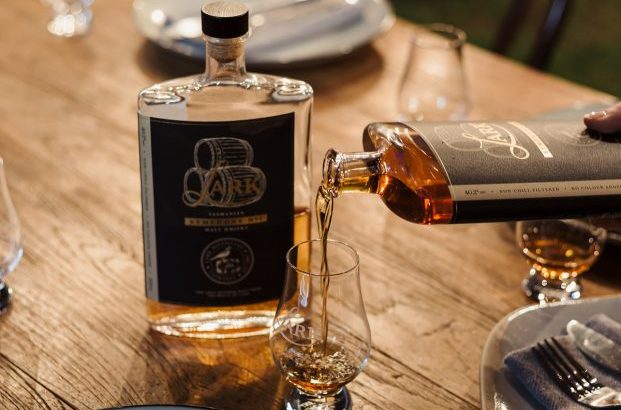 Chris Thomson is the Head Distiller and Blender at Lark, with Lark CEO Geoff Bainbridge telling Bars and Clubs in October last year that Chris is at the peak of his powers at the moment.

Those ‘powers’ are seeing Chris and the team at Lark produce some incredible whiskies, not only consistently through the core range, but also in the limited release whiskies such as Muscat Cask, Oloroso Cask, Rare Cask Para100 and even the Chinotto Cask released just last week.

But creating good whisky does mean sourcing good barrels, as Chris explained to Bars and Clubs: “Cask sourcing is a bit of an art, a bit of piracy and a bit of relationships and certainly a bit of experience in terms of knowing what the cask is going to do.

“You look at a cask and while no is the cask and every single cask that comes through this place, which is a significant quantity we look at individually and make notes on. It’s one of our great strengths is our cask sourcing ability.”

Lark has a very strong relationship with Seppeltsfield Winery in South Australia, with Seppeltsfield Managing Director Warren Randall also being a significant shareholder at Lark. This relationship gives Chris access to casks from 150 years of vintages, with different coopering practices, different treatments, wood cuttings with some of the barrels coming from wood cut down in Spain over 200 years ago.

“When you go into Seppeltsfield and there’s a 150 barrels to go through, there might be some from 1975, but also from 1915 and everywhere in between. So as technology and style and climate changes over the years you see different trends in barrels, so it’s always fascinating to go through barrels like that.

“Normally I fly down, but with COVID that proved too difficult with the last lot of barrels that we got here. So they came here on shipping containers and we just rolled them out on a sunny day and I went through them all,” which he explained reaped its rewards.

“The first time I smelled Tawny, it was Tawny but with this complete aromatic cherry, cherry blossom thing it was completely new. I’ve been doing this for 14 years and I never smelled Tawny casks present like that before. Then in the other container we had Oloroso casks with a coconutiness to them and I had never smelled that before, so it’s pretty cool. I just make a load of notes and have that in my mind of ‘I don’t know what I am going to do with it, but I’m going to do something with it’.”

He added: “Then constantly as you’re looking through your whisky stocks you think, ‘you know what those flavours might work with that cherry blossom or that coconut’. It might be a year or even longer, but then you taste and it has all come together.”

One the expression where it all came together was with the Muscat Cask, with Chris saying this is a whisky that is not about a distiller being clever, but simply finding an amazing cask.

“We going through a parcel of barrels and found a really old Muscat cask and it was just incredible. The quality of the Muscat that had been in it was phenomenal and inside the oak was still wet, so we just put the whisky in there and let the barrel do the work.

“It’s one of those whiskies were we’ve just let the ingredients sing, but the balance of the whisky is phenomenal and the depth of the character of the Muscat playing off the weighty notes of our spirit just works really well, everything is in its right place – super balanced, super deep and vibrant.”

The Muscat is one of a number of limited editions released recently by Lark, with more on the way and Chris told Bars and Clubs, that while consumer demand for different expressions was a key factor, the distillery is also benefiting from the hard work it has been putting in over the last decade.

“[The number of limited releases] is a combination of things. Over the last decade-plus we have really laid down some breadth in our portfolio and we’ve got some variability. People think you lay down whisky for consistency, but consistency in whisky comes from blending, it comes at the end. If you have variety within your portfolio it allows you to create new flavours or more complex flavours.

“Even if you want to have something consistent, to have complex, you need variety and that variety allows us to express the portfolio in so many ways.

“Then the demand is there from the consumer to explore whisky and have some fun with it, so we’re just trying to deliver the best whiskies that we can for the consumer.”