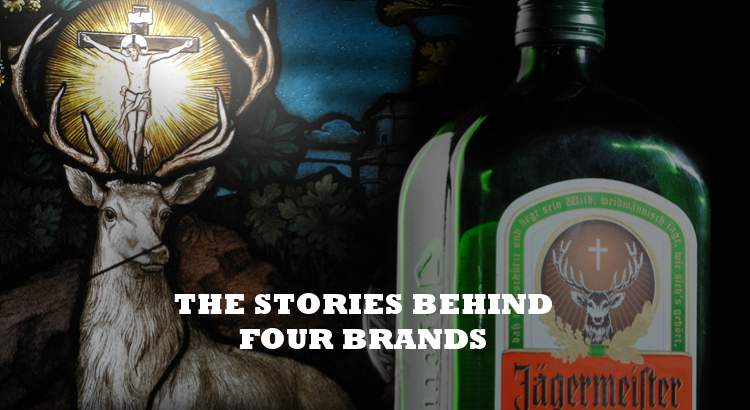 Often more entertaining than their contents are the stories in certain bottles. Each brand builds a story itself, and in the world of spirits those stories often span war, religion and royalty. Here are four brand stories to break out the next time you want to impress someone at the bar.

Meaning “Hunt Master” in German, the iconic cross in antlers emblazoned on each bottle is a Saintly symbol dating back to the Seventh Century. The German Saint Hubertus, Patron Saint of Hunters, was said to have converted to Christianity after seeing a crucifix appear between the antlers of a Stag. When Curt Mast, a German Hunt Master, expanded his father’s distillery, he bestowed upon each bottle the name “Jägermeister” and the symbol familiar to German hunters. Bring the presence of a saint to your spirit shelf with our range of Jägermeister.

Brothers Nicolai and Vladimir Smirnov made Czar Nicholas the Third’s favourite vodka. Unfortunately, their connection to Russian royalty cost Nicolai his life at the hands of Bolshevik revolutionaries in 1917. Escaping from torture and without his brother, Vladimir continued to distill their vodka in France under the less Russian name “Smirnoff”. Smirnoff then successfully made itself widespread among Americans unfamiliar with vodka by marketing itself as “White whiskey”, and the rest is history. Toast Vladimir’s story of survival and success with something from our Smirnoff range.

Bats are considered a blessing in Cuban folklore, so when Don Facundo Bacardí Massó’s wife Amalia discovered them roosting in their distillery she suggested they honour the sign of good luck by brandishing their bottles with bats. As well as bringing good luck, this helped bring business as it made their bottles identifiable to the innumerable illiterate consumers of the time. Many were simply able to ask for “el ron del murciélago,” or “the rum of the bat”, and that reputation of association has remained throughout their 150 year history. If you want to bless your shelf with a bottle of the bat, browse our Bacardi range.

For a wild turkey hunting trip, distillery executive Thomas McCarthy brought along some sample bottles of pure 101 proof whiskeys from his warehouse. The drink was celebrated by his hunting buddies even after the trip, as they often asked if he had any more of “That Wild Turkey Bourbon”. With a feeling that others might enjoy the drink just as much, McCarthy marketed the whiskey with the same name his hunting buddies bestowed upon it. If you’re on the hunt for good bourbon, have a gander at our Wild Turkey Range.