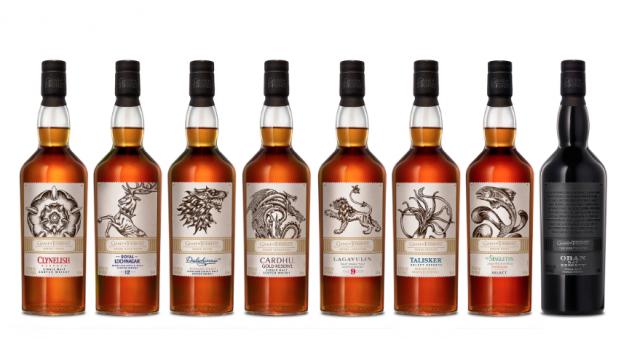 The release of the limited edition White Walker and single malt collection comes ahead of the start of the show’s eighth and final season. They can be ordered in the secondary market in Australia from www.mybottleshop.com.

The first shipments were only allocated to Woolworths unfortunately. We don’t think that is fair to Australian independent liquor businesses but Wooloworth’s controls 60% of Australia’s liquor market and what they say goes. If they want all the Games of Thrones whisky. They get it. Welcome to Australia. In other countries the GOT whiskies were much more fairly handed out.

“We knew there was fan appetite for a Game of Thrones whisky and once we saw the vision from Johnnie Walker for a way to collaborate we knew the idea was perfect and the time was now,” Jeff Peters, vice president, licensing & retail at HBO, said when the news was first announced last October. “From the beginning, they understood that we wanted to create something special, and they’ve accomplished that with White Walker by Johnnie Walker. We’re confident fans will enjoy sipping this delicious whisky as they wait for season eight and beyond.”

White Walker, named after the White Walker characters in the show, is intended to be being served directly from the freezer, and was created by whisky specialist George Harper alongside the small team of expert blenders at Johnnie Walker, with single malts from Cardhu and Clynelish both featuring in the blend.

Using temperature-sensitive ink technology, a graphic reading “Winter is Here” is revealed on reveal on the bottle when frozen.

“Whiskies from Clynelish have endured long, Scottish winters, not dissimilar to the long periods endured by the Night’s Watch who have ventured north of the wall – so it was the perfect place to start when creating this unique whisky,” said George Harper, blender and whisky specialist.

In addition to White Walker, Diageo has also launched a Game of Thrones Single Malt Scotch Whisky Collection, featuring eight Scotch whiskies paired with one of the iconic Houses of Westeros, as well as the “Night’s Watch”.

The whiskies featured in the collection are as follows:-