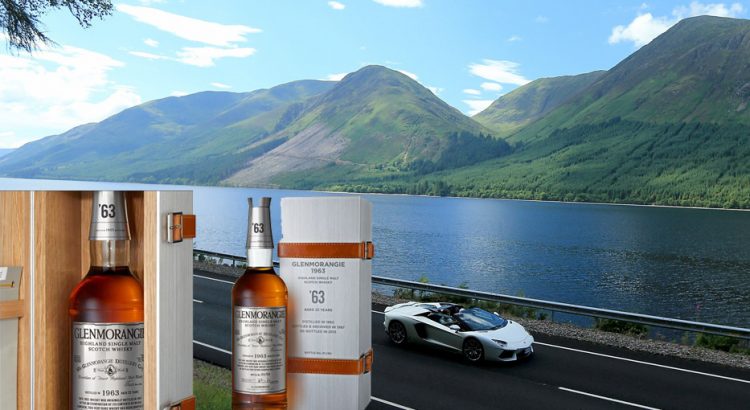 Since 1843, Glenmorangie has been on a journey as an industry pioneer. In 2013, Glenmorangie celebrates The Glenmorangie 1963 by re-releasing 50 bottles of this rare single malt scotch whisky. The Glenmorangie 1963 is not only a sublime sensory experience but the pioneer of extra maturation for the whisky industry. Born in 1963, 2013 also marks Lamborghini’s 50th anniversary as the manufacturer of some of the world’s most sought after supercars, ‘100 years of innovation in half the time’. To celebrate these milestones, Glenmorangie and Lamborghini shared in a breath-taking and picturesque journey on 24 July 2013 through the West Highlands in Scotland, finishing the journey at Glenmorangie House where a dinner was held with a tasting of The Glenmorangie 1963 with Dr Bill Lumsden, Glenmorangie’s celebrated Director of Distilling, Whisky Creation & Whisky Stocks.

Half a century has passed since the 1963 whisky was distilled and then released to the world in 1987 as the first ever extra matured single malt scotch. Since 1963, Glenmorangie has continued on a journey of craftsmanship, creativity and passion first started in 1843, using this inspiration of the past to shape future whisky creations, while Lamborghini has pioneered technology and Italian craftsmanship to become the benchmark for high performance and luxurious super sports cars. In contrast, the outstanding natural beauty, landscapes and biodiversity of the West Highlands, remains largely untouched by time.

The journey started with a succession of Lamborghini’s dynamic and elegant super sports cars, including the V12 flagship Lamborghini Aventador Roadster LP 700-4, launched this year, and a range of V10 Lamborghini Gallardo models. Drivers traversed some of Scotland’s most famous destinations: stunning Loch Lomond, mysterious Loch Ness and the beautifully preserved Fort William. The drive showcased the richness of the Scottish countryside and scenery, ending at Glenmorangie House.

There, to mark this anniversary, Dr Bill Lumsden, held an exclusive tasting of The Glenmorangie 1963, after which Paul Skipworth, President and Managing Director of Glenmorangie, presented the first of the re-released 50 bottles to Giorgio Sanna, chief test driver from Automobili Lamborghini’s Research & Development department, as a gift on Lamborghini’s 50th anniversary.

“Glenmorangie recognises innovators who share our pioneering spirit,” said Paul Skipworth. “We toast Lamborghini with the very special Glenmorangie 1963 on 50 successful years – a milestone in the history of luxury super sports cars.”

“Lamborghini is privileged to have its 50th anniversary honoured by this rare whisky,” said Giorgio Sanna.  “Lamborghini is delighted to be acknowledged by an icon such as Glenmorangie, which understands what it means to be an industry pioneer.”

This joint celebration not only marks a 50 year journey for Lamborghini and Glemorangie as industry pioneers, but their commitment to an unnecessarily well-made future.