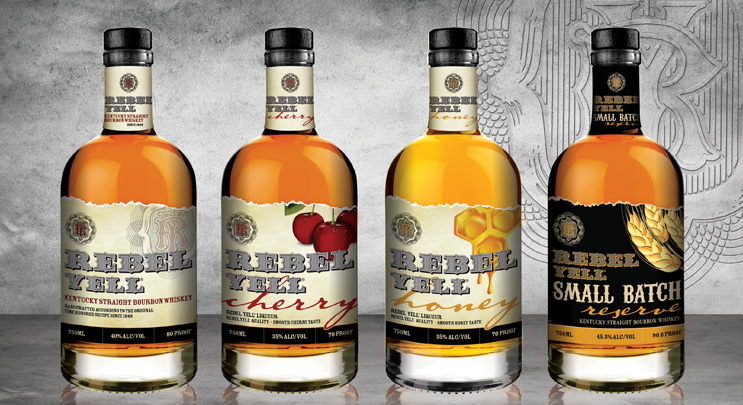 https://www.mybottleshop.com.au/rebel-yell-kentucky-straight-bourbon-whiskeyOk remember the 80’s and 90’s – cool bottle with confederate flags and a real Southern US feel?  Well yes Rebel Yell is back in Australia and www.mybottleshop.com.au online liquor store is only too pleased to be the first stockist in the country.

Rebel Yell is a brand of Kentucky straight Bourbon whiskey. The brand name is currently owned and marketed by Luxco, and the bourbon itself is distilled and bottled under contract by Heaven Hill at its Bernheim distillery in Louisville, Kentucky.

The “Rebel Yell” brand was created for Stitzel-Weller by Charles R. Farnsley around the 100th anniversary of the original Weller company, with the idea to distill it in limited batches for exclusive distribution in the southern United States. This plan lasted until the early 1980s, when, after some other changes of ownership following the break-up of Stitzel-Weller around 1972, the brand was purchased by the David Sherman Corporation of St. Louis, Missouri (now Luxco). By the late 1980s, Rebel Yell was distributed nationally in Australia but then withdrawn from the market sometime in the 1990s.

The first “cab off the rank” in Australia for the new look brand is the standard Rebel Yell Kentucky Straight Bourbon Whiskey. There is also a Rebel Yell Small Batch version which has a higher ABV and a reputed 2016 Rebel Yell Limited Edition Bottle!