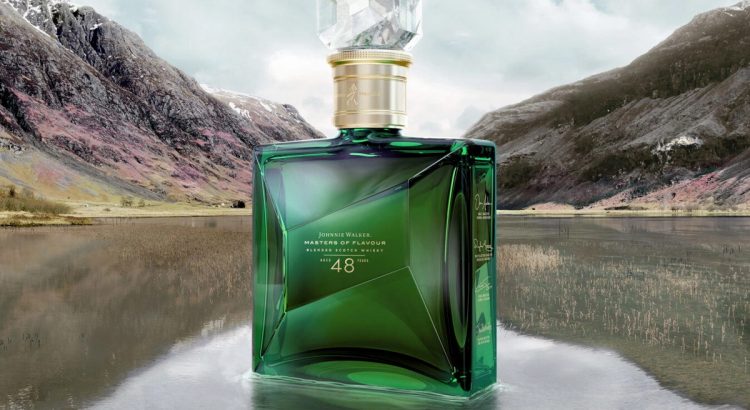 When Jim Beveridge took up a post as a flavour chemist at Johnnie Walker than in the early 1980s, he could scarcely have predicted the impact that move would make. Peering behind the curtain of the world’s best-loved blended whisky, Beveridge was invited to dive head-first into the deep intricacies of maturation, and it wasn’t long before he rose through the ranks to achieve Master Blender status. The Scotch icon made the coveted position his own, becoming the first person to be named ‘Master Blender of the Year’ by the International Whisky Federation for two consecutive years. Now, more than 40 years after he first stepped foot in the Scottish distillery, he’s handing over the reins. 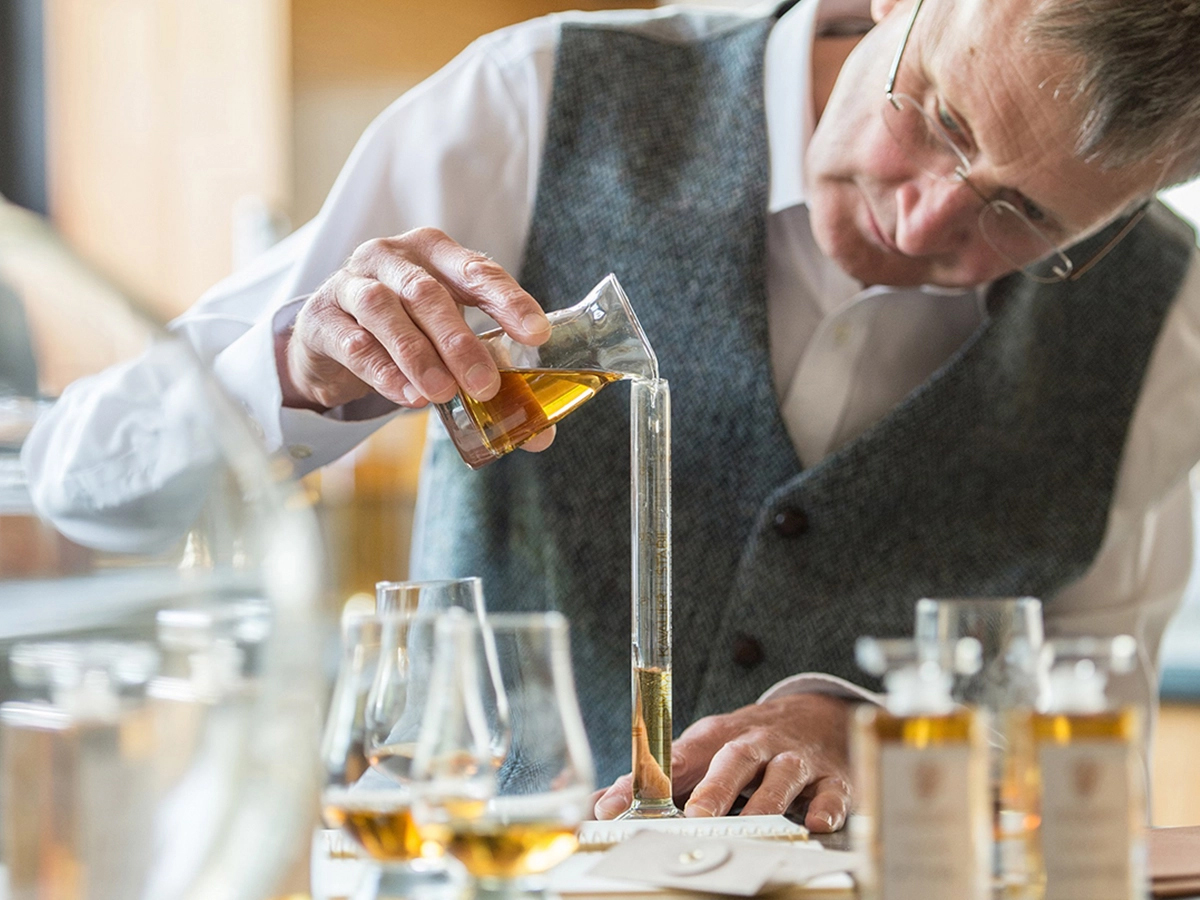 Announced late last year, Beveridge is passing the torch to Dr Emma Walker, who looks poised to lead Johnnie Walker into the next generation of world-class whisky. But in true Beveridge fashion, he isn’t going quietly. To celebrate the incredible career of the Scotch icon, Johnnie Walker has unveiled the third instalment of its much-loved Masters Series collection, a 48-Year-Old marvel worth a whopping AUD$35,500. 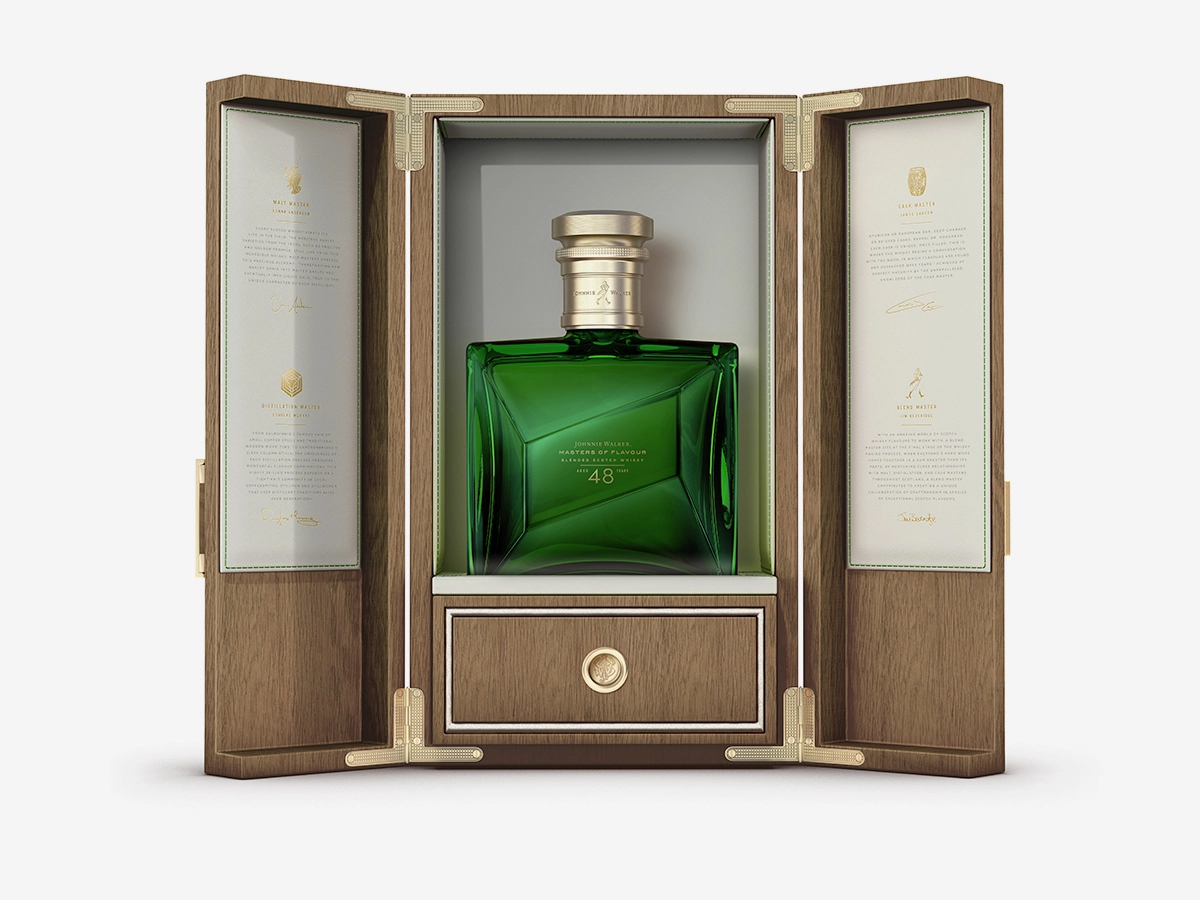 Following the success of the previous two releases, the new Johnnie Walker Masters of Flavour Blended Scotch Whisky Aged 48 Years arrives in spectacular fashion. Collaborating with Malt Master – Donna
Anderson, Cask Master – James Carson and Distillation Master – Douglas Murray, Beveridge pulled seven unique whiskies from the archives, many of which originated from now-defunct distilleries. Needless to say, only 288 bottles of the ultra-rare spirit have been released, of which only 15 will make their way Down Under. According to Johnnie Walker ambassador, Katie Nagar, the latest Masters of Flavour release is the perfect toast to an incredible career.

“To begin with, any Scotch at the advanced age of 48 years is rare in of itself,” she tells us. “But perhaps what makes Johnnie Walker Master of Flavour even rarer is that four out of the seven whiskies that go into the blend are drawn from reserves from ghost distilleries. Ghost distilleries are distilleries that have long since closed their doors and ceased operations, making their limited remaining whisky all the more precious.” 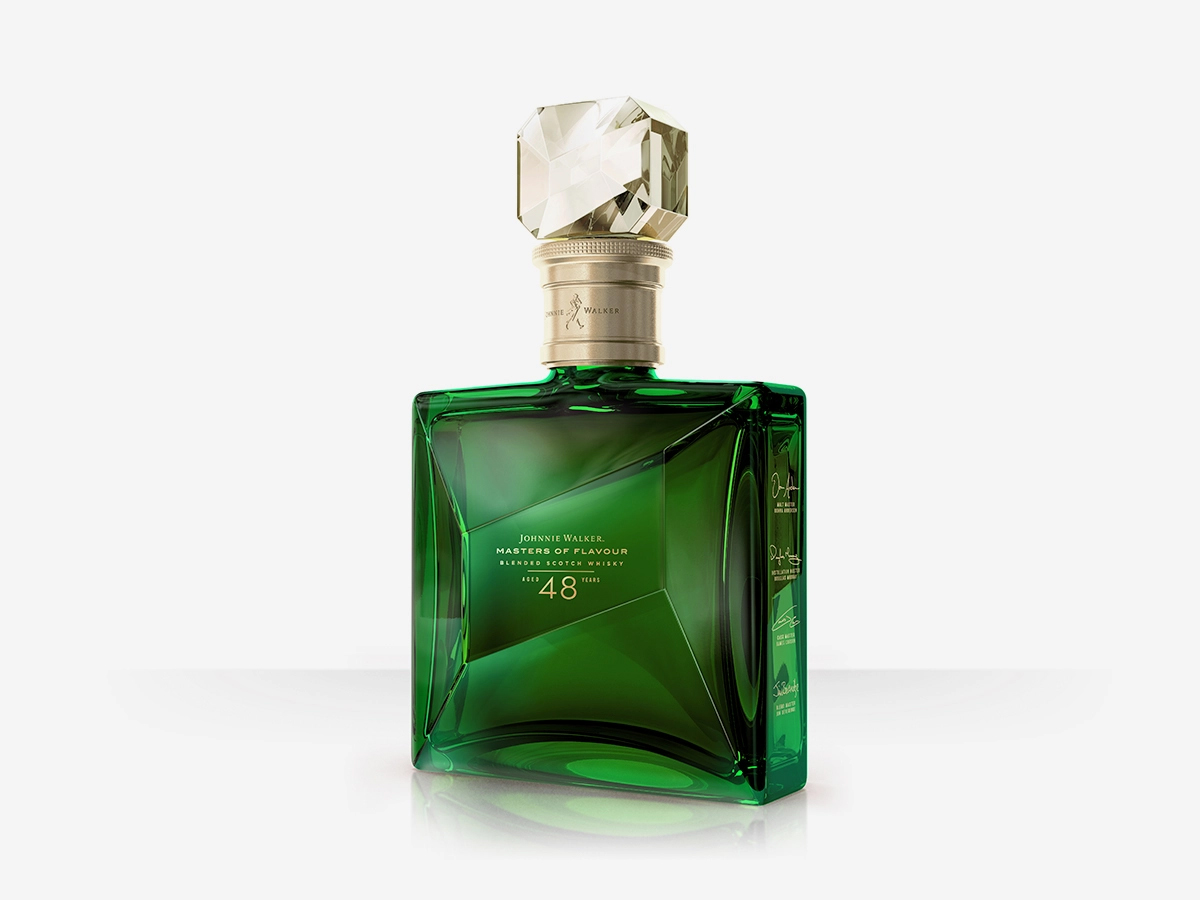 Looking more specifically, the new Johnnie Walker Master of Flavour contains drops from Brora, a coastal Highland distillery that has been closed since 1983, alongside Glen Albyn, Glenury Royal and Port Dundas, a renowned grain distillery that at one point was the second-largest distillery in Scotland. A collaboration in every sense of the word, the new 48-year-old blended whisky captures a unique flavour profile. From the soft and gentle smoke on the nose to the rich fruit flavours and subtle spice that arises on the palate, Masters of Flavour is a remarkable unveiling fitting of an equally remarkable milestone. Not that Beveridge is willing to take all the credit.

“It is fascinating to craft a Scotch that pays tribute to each of the four main steps in whisky making – malting, distilling, cask maturation and blending – to shine a light on how each craft contributes something very special to the extraordinary flavours that Scotch has to offer, from grain to glass,” he said. “It’s a unique collaboration of craftsmanship making exceptional Scotch; these are relationships that we have nurtured through 30 years of working in whisky. It’s an honour to pay tribute to those experts.” 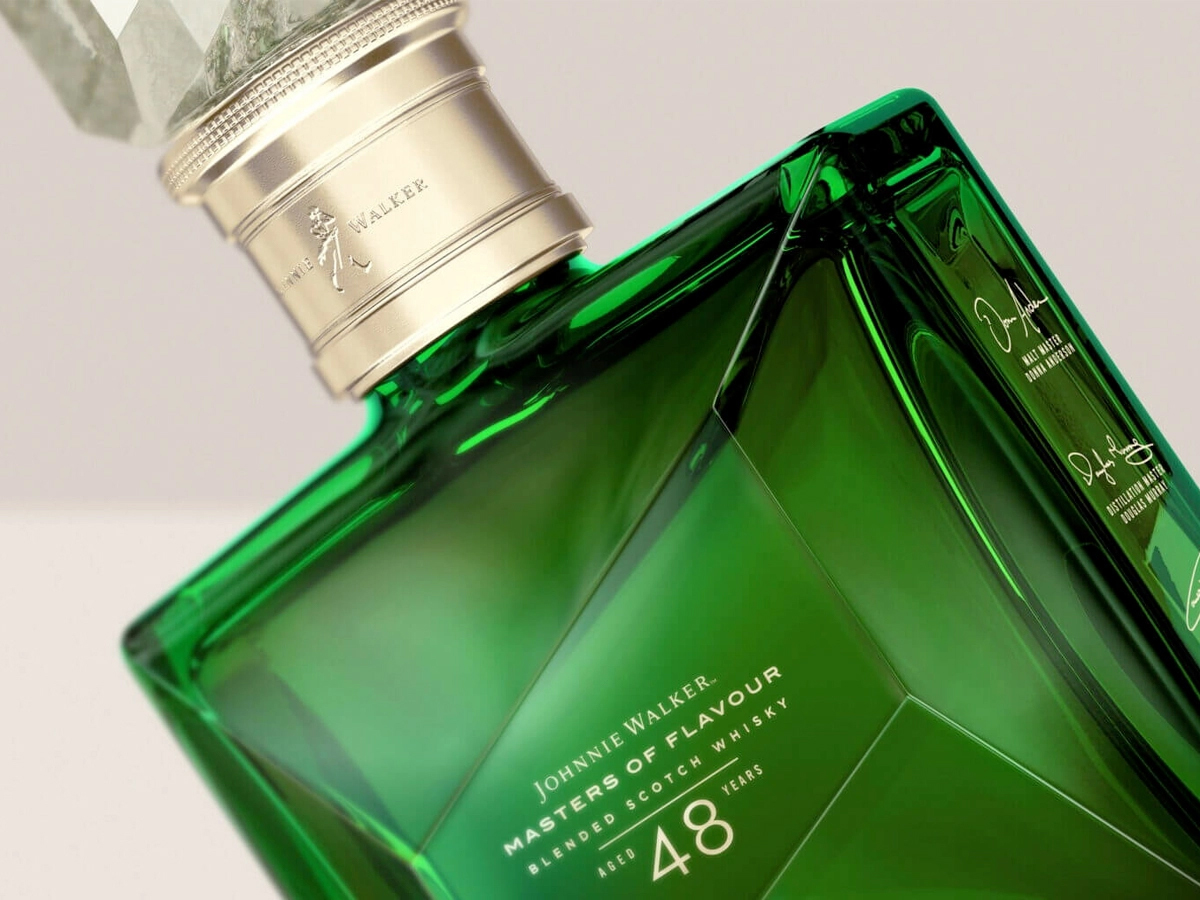 Following in the footsteps of its predecessors, the new Masters of Flavour boasts a unique lineage. As Nagar explains, each of the exquisite, limited releases within the Masters series is designed with its own specific theme in mind, paying homage to the rich history behind the Johnnie Walker business. The Master’s Ruby Reserve celebrated Beveridge’s 40th anniversary at the distillery by employing whiskies that had matured for at least four decades, including expressions that were amongst the first whiskies Jim worked with. Similarly, the John Walker Masters’ Edition toasted the art of blending with a stunning 50-year-old blend created using only select whiskies from distilleries that existed during founder John Walker’s lifetime.

“The Johnnie Walker Masters series is a limited-edition collection of ultra-luxury blends utilising some of the oldest and rarest whiskies in our reserves,” Nagar says. “The first of the Johnnie Walker Masters series, The John Walker Masters’ Edition, was released in 2018. But really if you want to find the origins of this project you need to go back further still. It was about 25 years ago that the Johnnie Walker blenders recognised that these individual whiskies were very special. The decision was made then to put them aside for special use, allowing each of them to continue to mature in their casks, knowing that, in time, something even more remarkable would emerge.” 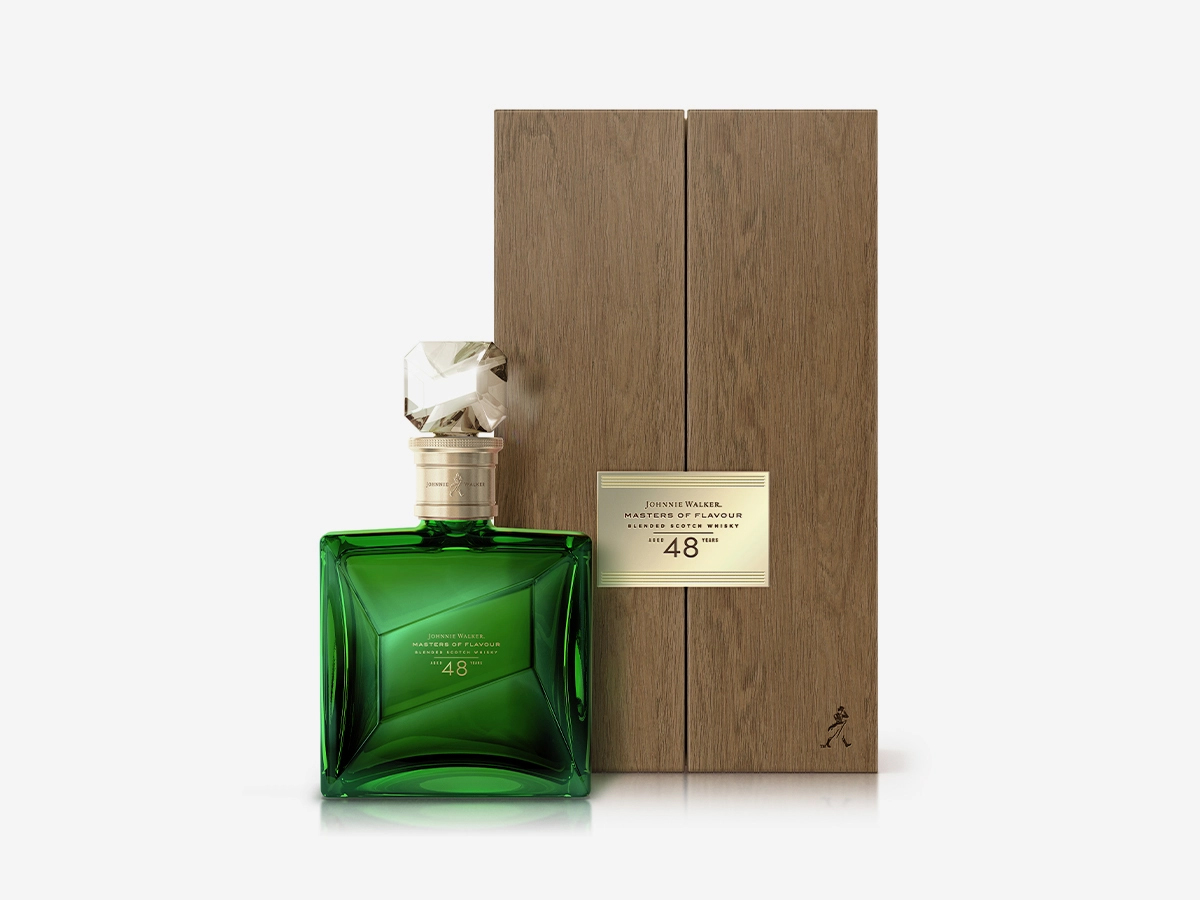 If Master’s Ruby Reserve and the John Walker Masters’ Edition were evidence of this, then Masters of Flavour takes the ethos of true craftsmanship, inside and out, to a whole new level. The stunning green crystal decanter that it is displayed in was cut, blown and polished in the cold workshop, revealing the brilliance of its facets. Naturally, each one is etched with the Striding Man and individual number.

The new Johnnie Walker Masters of Flavour Blended Scotch Whisky Aged 48 Years is limited to just 15 bottles nationwide, with a select number of retailers will offer the release. Remarkably, Nagar did confirm a small number of venues will offer it by the dram, but considering a bottle will set you back AUD$35,500, it won’t come cheap. You can check out the latest Masters Series release below.