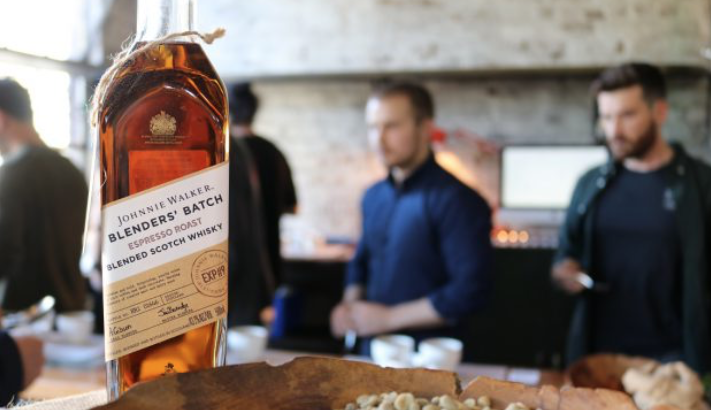 According to Johnnie Walker’s owners (Diageo), both of the limited-edition whiskies were designed with bartenders and whisky enthusiasts in mind.  Johnnie Walker hopes the craft nature of the whisky will form the cornerstone of exceptional cocktails.

The two new experimental blends were launched at a trade event in Sydney’s Inner West suburb of Newtown (not far from MyBottleShop HQ), where a bunch of bartenders were guided through a series of workshops by Simon McGoram, Diageo’s National Whisky Ambassador, and Stuart Morrow from the Baxter Inn.

The new whiskies have been crafted by a small team of 12 passionate and skilled blenders, under the expert guidance of two-time Master Blender of the Year Jim Beveridge.

The blend is the result of Gibson’s experiments using an inventory of whiskies distilled using barley roasted “more heavily than ever before”.

The whiskies have been matured in a combination of rejuvenated casks and first-fill Bourbon casks; according to Gibson, her goal “was to make whiskies that can be enjoyed by people with a range of taste preferences, especially by those who might think that whisky isn’t for them.

“To create this whisky, I drew upon almost 200 years of whisky-making experience at Johnnie Walker and took inspiration from some of the world’s best bartenders to explore a new world of flavour.”

A blend of whiskies from Speyside and the Lowlands, it’s been finished in casks that previously held Caribbean pot still rum which awakened intense fruit notes.

Johnnie Walker Blenders’ Batch Rum Cask Finish is a smooth, spicy and sweet blended Scotch that was borne out of one of the hundreds of ongoing experiments that the Johnnie Walker blending team has in development at all times.

Clark said: “Unforgettable drinks experiences are what elite mixologists strive to achieve when perfecting cocktails and it’s what Aimée and I, as blenders, have at the forefront of our thinking when experimenting and creating exciting new whiskies.”

Jonathan Morgan, head of International Brands at Diageo, added: “Johnnie Walker remains the leading Scotch brand in the world and is enjoyed by millions of consumers.

“We make classic Scotch whiskies that are hugely popular both globally and in Australia. Premium blended whisky sales in Australia have seen a jump of 7.5 per cent in the last year, which shows the growth and opportunity in this market.

“Johnnie Walker Blenders’ Batch opens the door on our experimentation and discovering new possibilities in flavour. We’re proud to open the door to the world of our blenders and the team of craftspeople they work with every day – our maltsters, distillers, coopers, coppersmiths and blenders.”