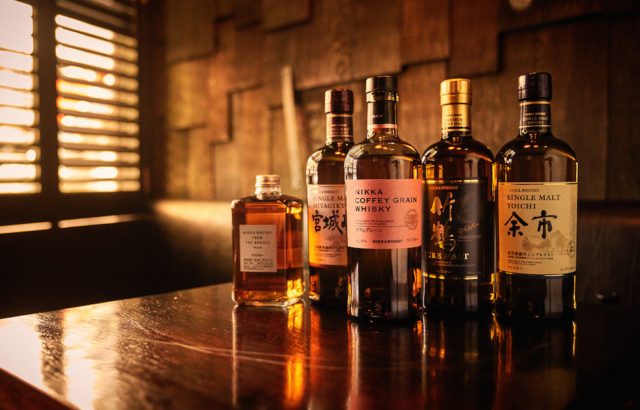 A liquor industry launch was held in Sydney where bartenders and whisky people were lead through a tasting of a selection of the fine whiskies produced by Nikka, focusing on the unique Coffey column distilled whiskies as well as the Taketsuru Blended Malt whisky. Also unveiled were the new Coffey still vodka, as well as a soft and citrusy Coffey still gin, drawing on their expertise of producing vodka and gin under licence since the 1960’s. On top of this, the subtly smoky Yoichi Single Malt and the delicate and fruity Miyagikyo Single Malt were available to taste.

Founded by one of the fathers of Japanese whisky, Masataka Taketsuru, Nikka was born in 1934 in Hokkaido and is known for its unique distilleries, one in snowy Yoichi, the other in Miyagikyo, a terrain similar to Scotland. Due to these different environments, the two distilleries produce a wide variety of styles of whisky or single malts, grains and blends that have become sought after across the world.

Nikka is also known for its Coffey still column distillation named after Irish inventor Aeneas Coffey, which is a traditional type of continuous still patented in the 1830’s, to ensure the whisky retains its unique and incredible flavours whilst also adding the distinct aroma that is a feature of all Nikka’s “Coffey” expressions.

Nikka Coffey Grain Whisky with its uniqueness has earned it cult status across the world. It is made mainly from corn, distilled in a Coffey still and aged in American Oak casks. Since the 1960’s, Nikka has been operating its two sets of Coffey stills. Taketsuru recognised that flavour was key and could produce a more distinctive whisky to that of modern stills.

Naoki Tomoyoshi from Nikka said, “We have a very rare still which produces an incredible liquid. We think Nikka Coffey Grain Whisky was a breakthrough product for the grain whisky category when it was first introduced in 2012.”

The delicate flavours of Nikka Coffey Whiskies are the result of unique distillation, careful ageing and blending to create a whisky style that combines a clean and flavourful pure spirit that highlights the influences of the raw material used in production without being over-powered by oak.