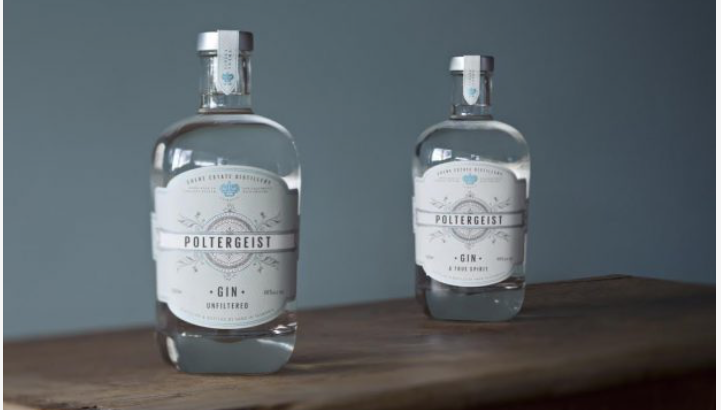 When the excavations at the historical Shene Estate in Tasmania began, the conservators found hundreds of Dutch case gin bottles, literally lying where they had been cast off the balcony by the landed gentry back in the day.

It was the beginning of a year’s long journey that would culminate in the continued survival of one of Australia’s most important historical sites – built in 1819 Shene Estate was the ostentatious country residence of early colonialist Gamaliel Butler, a man with links to King George III, and Governor Lachlan Macquarie – as well as the creation of a gin that is right at home among the locals, past and present.

Poltergeist Gin is not only created with a blend of local botanicals (pepper berry and lemon myrtle) and traditional botanicals – in the London Dry style – but also comes in two versions, “a true spirit” (filtered) and “unfiltered”. While it is ostensibly the same gin, the two versions have very distinct flavours and the unfiltered version – designed to be sipped over ice – certainly packs a bit more of a punch.

According to Myfanwy Kernke, the creation of the gin has been a labour of love, and the release of the complimentary versions was due to the fact that the team just couldn’t decide which one they preferred.

“It’s also nice because we think we’re the first to simultaneously release the same style of gin two ways,” she says.

The team is made up of Myfanwy’s parents, Anne and David, her sister Ceridwen, and a three-legged westie-cross-poodle named Rupert Archibald III. They’re joined by master distiller Damian Mackey, the man behind the gin recipe who is currently distilling at home in a shed he built over a filled-in backyard pool. He also enjoys playing the banjo when he isn’t making gin or whisky.

Poltergeists are known in as traditionally being the only spirit that can move objects – see the horror film franchise for examples – and according to Myfanwy there has been a few unexplained instances at the property. The word is also symbolic, the gin will be the “spirit” that gets “things moving” at the property and assists with the preservation of the historic estate.

“It’s the passionate spirit that will tell the story of the property, something that will never be forgotten,” she says.

Visitors to the site can now share in a handcrafted Australian gin while wondering through a living museum that will soon house an array of artisans and craftsmen such as blacksmiths – alongside the distillery – in the convict forged gothic stables and barn.