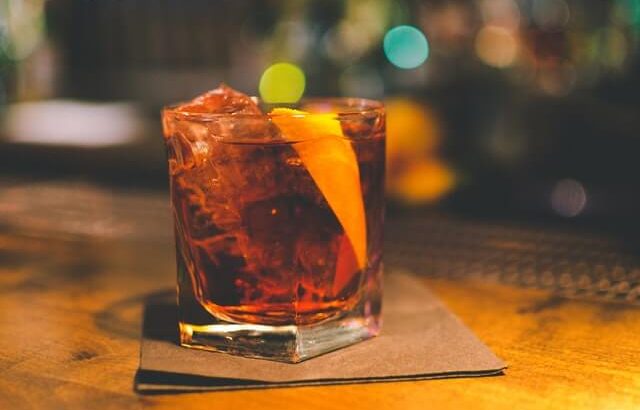 The most widely reported version of this drink’s origin is that it was invented at Caffe Casoni in Florence, Italy in 1919. Legend tells that Count Camillo Negroni asked his friend, bartender Forsco Scarselli, to strengthen his favourite cocktail – the Americano – by replacing the soda water with gin. Scarselli added an orange garnish, rather than the lemon you’d usually get with an Americano, and the drink took off. Before long, everyone was coming into the bar for a ‘Negroni.’

Camillo Negroni himself was an interesting figure. He travelled around America while in his twenties and lived the life of a cowboy for a period. He also lived in London, which, we like to think with its prevalent gin scene, led to him (perhaps inadvertently) creating one of the most iconic cocktails of all time.

The Negroni family was quick to take advantage of the cocktail’s success too, founding the Negroni Distillery in 1919, in Treviso, Italy, where they produced a ready-made version of the drink, sold as Antico Negroni. The distillery is still open today, the under the ownership of a new family.

Why all the fuss?

Designed as an aperitif, a good Negroni is the very definition of balance and simplicity, and its continued popularity comes as no surprise.

This ruby red Italian charmer is now popping up everywhere, having made its return to the mainstream in mid-2015. While the Negroni may look sweet, it’s anything but – it’s strong, bitter notes are what Negroni nerds revere about the concoction; there’s no syrup masking anything here.

Drink it before a good meal, not just because it is the very definition of an Aperitivo cocktail but because a gin, vermouth and bitters is a booze layered on booze combination that would have sunk Henry VIII.

Pour gin, vermouth and bitters into a mixing glass. Add ice and stir until chilled. Strain into a rocks glass and garnish with an orange peel.

If you are at home, the equal part nature of the drink means you can use anything from an egg cup to a shot glass and you can forgo the mixing and straining, simply pour all three components into a glass, add ice and stir it around with your finger for a bit. It’s the kind of drink where there’s no need to stand on ceremony and it’s the kind where so long as you’ve got the quantities right, the rest takes care of itself …

Even if you keep to the equal part measurements, there is a world of combinations when you start experimenting with different gins, vermouths and bitters. Our advice for those looking for a few rule of thumbs is to pick a bold gin that will stand up to some strong mixing partners (think big resinous juniper forward gins), make it as above first and go from there.

If it’s too bitter and punchy, pick a bitter like Aperol that’s a bit more accessible and pair it with a rosé vermouth instead (this works wonderfully for less punchy gins too). If you loved the classic however, see what picking an Amaro does instead of the likes of Campari. They are often more bitter but their botanical depth can enliven the herbaceous depth of some gins, especially when garnished with a herb instead of a citrus peel.

For those not convinced at all, go off piste and head towards either white or dry vermouth and gentian bitters and make a White Negroni instead. While we’ll always be most interested in the gin ourselves even we have to admit that when it comes to the Negroni, the choice vermouth and the bitters most likely have the biggest impact on the final flavour profile – experiment around and make sure that you lavish each component with its just deserts.