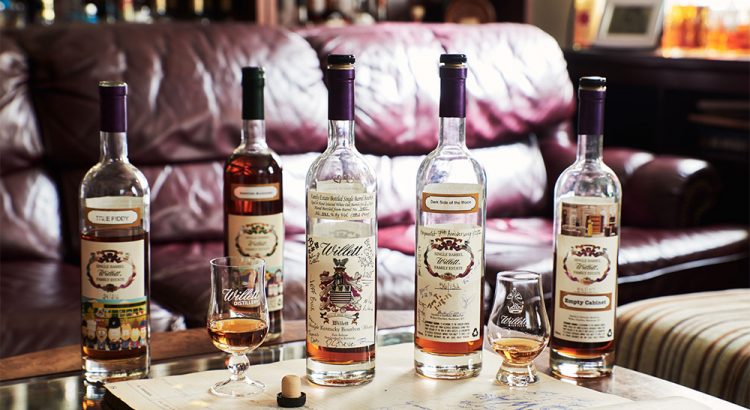 Unlike, say, Pappy Van Winkle or Buffalo Trace’s Antique Collection, Willett is not a name that bourbon drinkers even know they should know. Even if they did, Willett’s output is virtually impossible to understand for the uninitiated. The packaging looks largely the same across the entire product line; Cognac-style bottles with subdued white labels are differentiated only by small, handwritten details near the shoulder noting age, proof and barrel number.

The barrel number is probably the most critical detail, though it’s also the most hard to fathom for collectors and sippers wanting to find the best barrels. Ironically, the Willett bottle that is most unique in appearance—Willett Pot Still Reserve is the most loathed amongst avid collectors due to its lower proof and milder flavour profile.

Like many Kentucky brands, the roots of Willett go back to the 19th century, but the story of what separates it from its peers begins in 1984, when Even Kulsveen purchased the company from his father-in-law, Thompson Willett. Renamed Kentucky Bourbon Distillers (KBD)—even though, at that time, they weren’t actually distilling anything—Kulsveen immediately began purchasing unwanted stock from nearby properties, which were glad to part with it as the public’s taste increasingly tilted toward clear spirits. When a renewed thirst for well-aged bourbon and rye arrived in the early aughts, KBD was well equipped to meet the demand, and their supply represented a cross section of some of the best whiskey produced in the heart of bourbon country.

Willett unlike so many other brand owning bourbon sourcers were transparent, not trying to make up stories about labels, just honest that they were sourcing whiskey while they slowly built back a functioning distillery.

Kulsveen’s son, Drew, joined the family business in 2003 and, in 2006, began releasing what he thought to be the best-tasting of its stock as cask-strength, non-chill-filtered single barrels under the Willett Family Estate umbrella. While most bottles were allocated to bars, liquor stores and a few lucky individuals, occasionally they turned up at independent liquor retailers like www.mybottleshop.com. Enthusiasts and connoisseurs alike found many to be world-class. In fact, a 22-year-old rye release from 2006 garnered what was then the highest score in Whisky Advocate history and was deemed a “benchmark” for the category. It didn’t take long for in-the-know collectors to start lapping up anything they could find.

“There’s nothing out there like Willett,” says Danny Strongwater (not his real name), a Willett collector based in California, whose own blend, known as California Gold, was inspired by its distinctive cherries and pine flavour profile. Yet even connoisseurs struggle to detect where any individual Willett first gestated.

Unlike other non-distilling bottlers, who often source their stock from a single distillery (usually Indiana’s MGP), Willett acquired barrels from a vast array of producers: Bernheim, Heaven Hill, Four Roses, Jim Beam; some earlier releases were even said to be from the vaunted Stitzel-Weller Distillery. By actively sourcing during the 1980s whiskey “glut,” Kulsveen was able to acquire some truly one-of-a-kind stock that, in a more whiskey-friendly drinking era, might have been blended into less-notable releases.

Of course, the cult-like fanaticism surrounding Willett hinges on more than just great whiskey. As is often the case in the world of spirits, its rarity—each individual release consists of approximately 20 times fewer bottles than Pappy Van Winkle—contributes to its perceived cachet. Compounded with the high barrier for entry (it has its own language, after all), it creates an additional layer of exclusivity, only amplifying its desirability.

And it’s only becoming more desirable by the day. In 2017, Willett had to temporarily suspend its private barrel program due to overwhelming demand. Meanwhile, its equally sought-after “gift-shop-only” releases have appeared with greater infrequency and, when they do appear, necessitate standing in exceedingly long lines. As a stopgap measure, the company began bottling its own distillate in 2014, but it has yet to quell the frenzy.

The Most Sought-After Willett Bottlings

Nowadays in 2019 bottles especially the 13 to 22 year old age statements are selling out the day they are released. If you are bourbon enthusiast, collector or drinker you should check out the Willett page at www.mybottleshop.com to find one of the world’s largest collection of prized age statements. Of course there are many private bottling releases that are enthusiastically traded by individuals and wont be found on the shelves of any liquor store