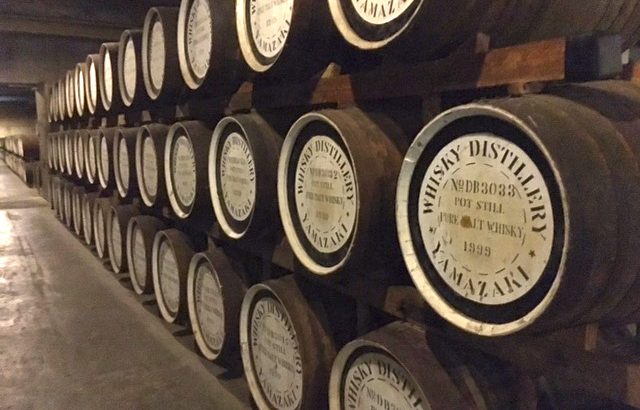 Yamazaki Distillery is a unique single distillery producing a variety of whiskies, which very few distilleries in the world can match. Yamazaki started out crafting world-class whisky to please the delicate Japanese palate. This theme has been a constant over the distillery’s long history as craftsmen add new innovations while continuing to practise skills passed down by their predecessors. The story of how Yamazaki Distillery crafted Yamazaki single malt whisky and endowed it with a world-class level of quality is the story of Japanese whisky itself, and it is no exaggeration to say that this is a sacred spot for Japanese whisky. Together with a moist, lush climate that is blessed with distinct seasons, Yamazaki’s abundant supply of superb-quality forest water makes it a utopia in which to craft whiskies that are truly exceptional.

Shinjiro Torii, founder of Kotobukiya (which later became Suntory), began building Yamazaki Distillery, Japan’s first malt whisky distillery, in 1923.  His goal was to create a whisky uniquely suited to Japan’s climate that would be embraced by the Japanese people. The site in Yamazaki offered plentiful, high-quality under ground water that was perfectly suited to whisky-making, and its moist climate met essential requirements for ageing whisky. The quality of the area’s water was particularly praised by Dr. Moore, a contemporary of Shinjiro and an authority on zymurgy in Scotland. Torys, Kakubin, Old, Royal… each of the many renowned whiskies developed in this ideal whisky-making setting and introduced as the distillery overcame the challenges posed by such defining events as World War II captured the essential qualities of its era and helped drive the development of Japan’s whisky culture. Today, Yamazaki single malt whisky has been embraced by whisky-lovers the world over. Yamazaki Distillery’s unique history makes it the true birthplace of Japanese whisky.

Located amidst magnificent bamboo forests at the base of Mt. Tennozan where the Katsura, Uji, and Kizu Rivers merge southwest of Kyoto, Yamazaki enjoys a lush natural setting. Due to the different temperatures of the three tributaries’ waters and the distinctive topography of the area, which lies sandwiched between a plain and a basin, Yamazaki is characterised by high humidity levels and frequent fogs. The resulting moist climate is well suited to the ageing of whisky and helps make Yamazaki a utopia for its production.  The water is so good in the Yamazaki area that it is highly sought after by Japan’s top tea makers to make the perfect brew.

Yamazaki is praised for its pristine waters – a resource that is critically important in the making of whisky – in the Man’yoshu, an ancient anthology of poetry. Water known as Rikyu no Mizu [water of the imperial villa] continues to bubble up near the distillery and has been designated by Japan’s Ministry of the Environment as one of the best natural mineral waters in the country. It is even said that tea ceremony master Senno Rikyu would draw pure water here for use in the tea ceremony. Located at the foot of Mt. Tennozan, Yamazaki Distillery is surrounded by ancient bamboo forests. Bamboo trees favour pure water, and the deep, rich aroma of Yamazaki single malt whisky derives precisely from the use of the delicious, pure water from these forests.

Following distillation in Yamazaki’s variety of direct fired copper pot still, the whiskies are placed in casks and allowed to slumber in the distillery’s ageing warehouse until it has mellowed. Even if the same batch of whisky is filled at the beginning, the outcome of the maturation differs depending on the type of casks filled with. The Yamazaki distillery uses casks of different shapes, sizes, and varieties of oak, including Japanese oak (Mizunara) grown in Hokkaido, very unique type of cask. When whisky is allowed to age in Japanese oak (Mizunara) over long periods of time, the wood imparts a distinctively mellow bouquet that evokes aromatic trees found in Japan. This unique flavour has been gaining the special attentions from around the world.

In 2017 Tamazaki produced the following single malt and bended whiskies: