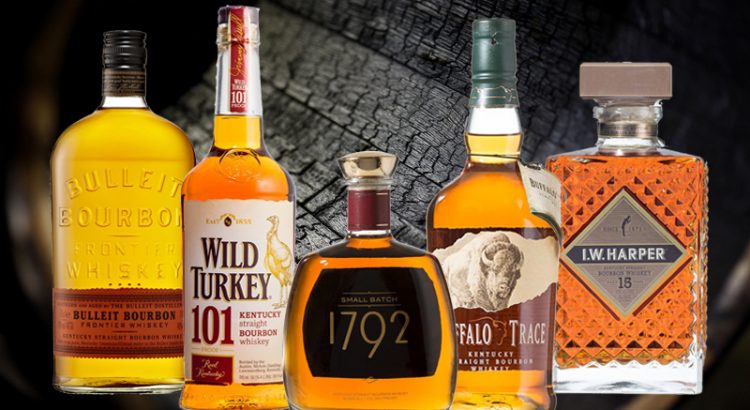 Continuing the list of the top 10 Kentucky Bourbon’s that bring the best value and highest quality in this category..

Ridgemont 1792 Reserve
This bourbon, whose name gives a nice nod to the year Kentucky became a state, is the mellowest and most sippable bourbon on this list. I would actually caution against dropping any ice into your glass with this one, and wouldn’t dream of mixing it into anything. That’s because to fully appreciate Ridgemont 1792 Reserve, you’ve got to note the way the delicate, sweet, caramel notes on the first sip make your tongue tingle long after you’ve swallowed and exhaled. This might be the best finish of any bourbon I’ve had: it’s fleeting, like a winsome memory, and that appeal is enough to draw you back again and again as you sip, luxuriate, and dwell on that thought. [$99.99]

Bulleit Bourbon Frontier Whiskey
Gone are the days when Bulleit was a bourbon aficionado’s best-kept secret, and bottles could be had for less than $20. These days, Bulleit (like its rye sister) is a mainstay in every bar that’s worth a damn, and with that ubiquity has come a rise in price. Still, if you’re judging the price based on the product’s quality, then Bulleit is still a phenomenally good value, and it will be for a long time to come. With a deep amber colour and a caramel-vanilla aroma, the bite on this one can be a little surprising to newcomers. But, man, that bite is what keeps me coming back. Bulleit’s balanced flavour gives it a versatility that makes it equally suitable as sipping bourbon, and also as a fantastic base for a Manhattan or an Old Fashioned. [$49.99]

Buffalo Trace Kentucky Straight Bourbon Whiskey
The namesake bourbon from Buffalo Trace is produced by one of (if not) the oldest distillers in the nation, and that history is on display in each caramel and honey-noted sip. With a long finish and a robust, full taste, this able-bodied bourbon would be an ideal addition to anyone’s bar or liquor cabinet. (And apparently lots of us agree on this point, as the distiller warned of possible shortages beginning in 2013…) While I most often sip this one on the rocks, it’s also true that the spirit’s lighter (but nevertheless distinct) flavour lends itself nicely to a Manhattan or an Old Fashioned. [$49.99]

IW Harper Bourbon has won a stack of awards at spirit competitions around the world. The first award came at the New Orleans Exposition way back in 1885.  Then at the Chicago World’s Fair in 1893, followed by wins at the Exposition Universal, Paris, France, 1900, the Louisiana Purchase Exposition, St. Louis, 1904 and the Greater Louisville Exposition 1907.

With five gold medals awarded to I.W. HARPER, it became known as the “Gold Medal” bourbon.

Traditionally IW Harper was an export only bourbon and then only exported to Japan. Recently the straight bourbon and the 15 year old bourbon came back to the USA market and thanks to MyBottleShop, you can buy all 3 versions here in Australia. The IW Harper 12 and 15 year old are presented in the beautiful decanter style bottle. [$79.99 to $149.99].

Many people are put off by the ol’ kickin’ chicken because of its high proof and low cost: two traits that often spell disaster. But Wild Turkey 101 breaks that mould and is truly one of the market’s best value bourbons. New initiates are going to want to plunk two or three cubes of ice into their glasses, but after some acclimation, this one can be enjoyed neat at room temperature. Its initial spiciness – driven home with a not insignificant amount of kick – will after a time give way to light, sweet notes of caramel. Altogether, you’ll come away thinking, “This is what a bourbon should taste like.” [$58.99]

*If you’re interested in any of the bottles featured, don’t forget to sign up to the ‘Wait List’ on the product page in order to be notified when the product hits the shelf