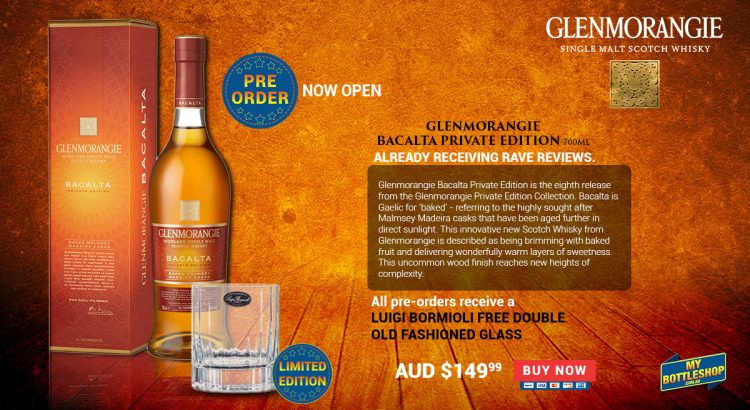 Overnight we have seen the 8th release of the latest edition to the award winning Glenmorangie Private Edition series – Bacalta, Gaelic for ‘baked’. This latest release is a homage to the master

distiller Dr Bill Lumsden’s love for the old Madeira Wood Finish which was discontinued in 2004. Madeira is a fortified wine made in the Madeira Islands off the coast of Portugal. It is a versatile fortified wine that is enjoyed as an aperitif or added to many classic cooking recipes. They say that if you open a bottle of Madeira and re-cork it, the wine will last for decades and not spoil.

The hogsheds were filled with Madeira for a number of years to prepare them for the whisky, the wine that was used was unfortunately discarded when it’s time in the casks was up. The Madeira casks were exposed to the sweltering Portuguese sun which imparts a unique environmental influence on the barrels. This is the estufagem aging process whereby barrels are stored without the use of artificial heat and by the winery in warm rooms that are specifically designed to achieve the flavour profile of the Canterio Madeira. This heat is carried through in much of the flavours that are present in the intriguing Glenmorangie Bacalta.

Back to the whisky; we’re told that 10 year old Glenmorangie from ex-bourbon casks is used to fill these medium to heavily toasted American oak 250-litre ex-Madiera hogsheds. After spending a further 2 years in the Madeira casks, this now 12 year old non-chill filtered Glenmorangie Bacalta is brimming with baked fruit flavours. The name for this Private Edition is a reflection of the flavours imparted by these very special casks, delivering wonderfully warm layers of sun baked sweetness – we can’t wait to get our hands on this harmonious release from Glenmorangie.

Sign up to the MyBottleShop Glenmorangie Bacalta waitlist to be notified when it hits the shelf.