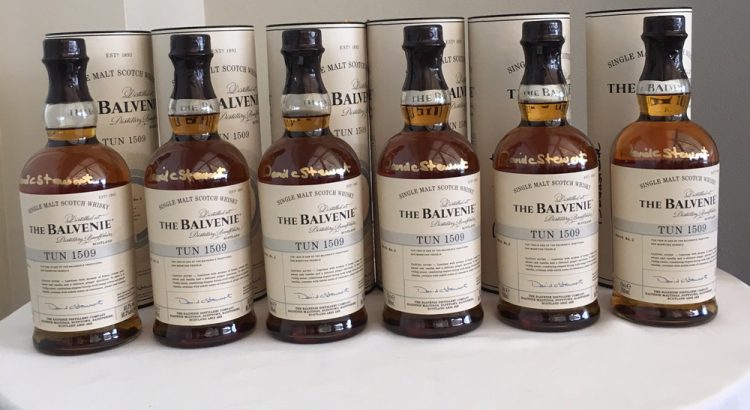 As a matter of differentiation from other Single Malts,  The Balvenie has has always had a focus on quality and craftsmanship.

Although The Balvenie is one of Scotland’s larger distilleries, there are no mass production techniques in use.  Everything is done rather laboriously. For example, The Balvenie continues the maintenance of the distillery’s malting floor and continue to malt their own barley on site. The Balvenie has also invesed heavily in its own cooperage. There aren’t many distilleries in the world that could lay claim to those two facts.

There is no greater manifestation of The Balvenie’s craftsmanship than in the Tun 1509 bottling.  The Balvenie Tun series (originally Tun 1401) was a vatting of numerous casks that were vatted (combined or blended) together in a large marrying tun, where they would spend several months melding and merging together before being bottled as a special release.  However, Tun 1401 only had a capacity of 2,000 litres, and so after nine releases in the last three years, the bottlings’ popularity and demand had come to exceed supply.   Tun 1401 was suspended and Tun 1509 built with a capacity of 8,000 litres.

The second Batch of Tun 1509 is a no age statement bottling at 50.3 (whereas Batch 1 was 47.1%); is non-chill filtered, and has been made from a mix of 32 (42 in Batch 1) different casks that were selected by David Stewart, malt master for The Balvenie.  The make up of the vatting was 25 American oak ex-bourbon barrels and seven European oak sherry butts.   The minimum age of any whisky in the blend was 25 years.  The oldest whisky was a whopping 50 year old Balvenie that lay dormant in the barrel house since 1962!!

If you would like the very rare chance to buy a bottle of Balvenie Tun 1509 Batch 2 signed by the legendary Malt Master Mr David Stewart then click here.