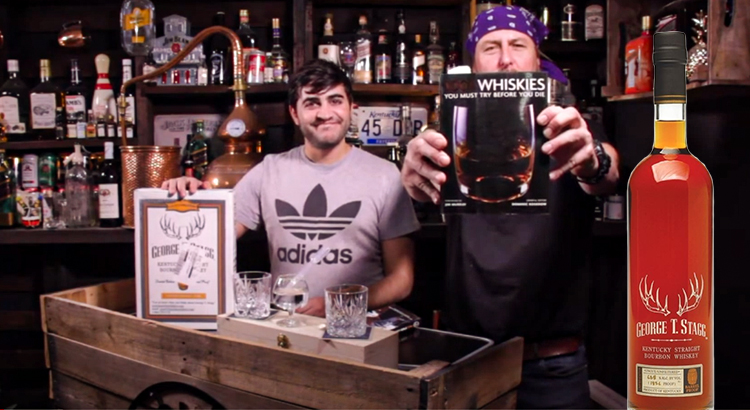 George T Stagg Bourbon Review in Sydney Australia. Crack open a George T Stagg straight out of the box and wrapping. Open up the Stagg bourbon and have two clowns from mybottleshop.com give it a good necking. Yumo!!

George T. Stagg built the most dominant American distillery of the 19th century, during a time known as the Gilded Age of Bourbon

Already critically-lauded for the existing whiskies in the Antique Collection (W.L. Weller, Eagle Rare and Sazerac), Buffalo Trace’s reputation continued to soar as George T. Stagg won Malt Advocate’s Whiskey of the Year within months of its release, and hit the stratosphere a year later when George T. Stagg was given a then-record score of 97 points and named by Jim Murray as World Whisky of the Year in his first ever Whisky Bible in 2004, retaining its crown the following year.

Named after one of the 19th century proprietors of what was then the Old Fire Copper distillery, the 15 year-old high-rye recipe George T. Stagg bourbon was the first whiskey to be offered by Buffalo Trace in an uncut, unfiltered, barrel-proof state.In the initial release notes for George T. Stagg, Global Brand Director Ken Weber said “We are excited to respond to the demand for a barrel-proof bourbon with a whiskey as premium as this one, albeit on a small scale. We think that the introduction of Stagg will ring a chord with the bourbon connoisseurs out there. ”

This turned out to be something of an understatement. George T. Stagg is now firmly established in the very top echelon of American Whiskey, with every release garnering further gold medals and industry accolades and is almost universally acknowledged as the best bourbon in the world, winning Bourbon of the Year in Jim Murray’s Whisky Bible three years in a row between 2008 and 2010. Stagg’s combination of immense spicy rye complexity and enormous natural alcoholic strength (regularly exceeding 70% abv) has proven to be a formidable recipe for success,raising Buffalo Trace distillery to a household name in the consciousness of whisky drinkers the world over.