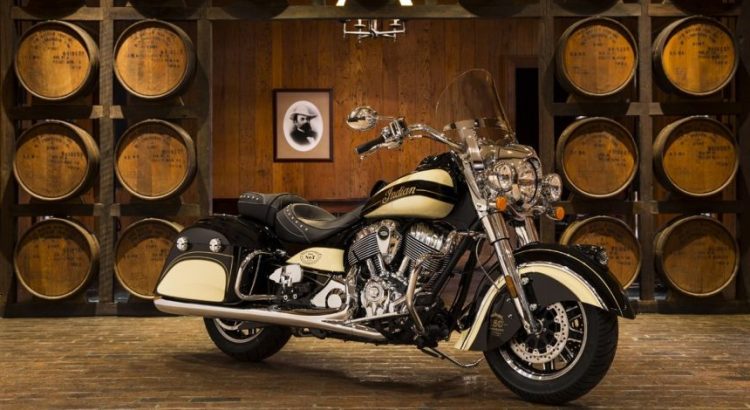 Indian Motorcycles and the Jack Daniel’s distillery have announced a joint collaboration of bike and bottle,  although somewhat of an oxymoron, it is wisely imprinted onto the bike that “throttles and bottles don’t mix.”  Created to commemorate the 150th anniversary of the Jack Daniel Distillery, which was registered in 1866, the Indian motorcycle model will be produced in limited numbers not to exceed 150 total units. The first of the limited edition series, an Indian Chief Vintage version, will be auctioned for charity.

Powered by the highly regarded Thunder Stroke 111 engine, each of these new 2016 model year motorcycles uniquely maintains the style and craftsmanship Indian Motorcycle is known for while offering the ultimate in versatility. Featuring quick release windshields and saddlebags, both may be ridden as a stripped down cruiser or treated as a capable touring model,

Among the custom touches on the Limited Edition Jack Daniel’s Indian Springfield and Chief Vintage are a front guard featuring gloss black head dress housing and trim, commemorative Jack Daniel’s 150th Anniversary logo and an inscription with the names of the seven Master Distillers who have overseen the distilling process over its 150-year history.

Custom accessories, include Jack Daniel’s-inspired custom paint and logos, badging, seat and saddlebags. The Indian also also come with a custom printed Jack Daniel’s whiskey barrel top to commemorate each bike.  This bike is sure to be a hit

As usual, sadly for us Aussies, none of these Limited Edition collector models are coming to Australia (unless you win one in a charity auction).  The 150 bikes sold out within 1 day! Never mind though you can still take part in the Jack Daniel’s 150th Anniversary celebrations.