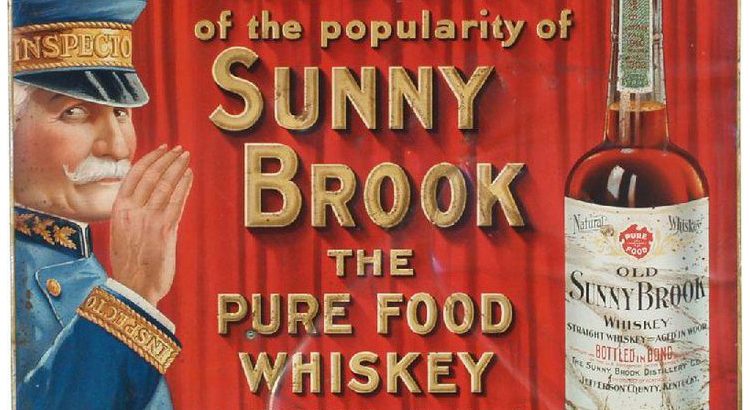 The Rosenfields Were “The Sunny Brook Boys” 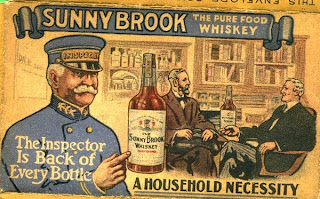 The Rosenfield Brothers were the sons of an immigrant jeweler who moved his family from state to state, city to city, until they found a home in Chicago and eventually gained recognition as among America’s foremost distillers.  Because of their flagship whiskey, Morris Rosenfield and brothers Lewis and Joseph claimed fame and fortune as the Sunny Brook Boys.

The Rosenfields’ father, Sampson, often called “Sam,” had been born in Wurttemburg, Germany, about 1825.  Mother Rebecca also hailed from Wurttemburg.  Sam, who worked  as a jeweler, had emigrated in 1850. Since Rebecca would only have been 14 at that time, it is likely they married after Sam had settled in the U.S., circa 1853.   The 1870 census found the Rosenfields in Rock Island, Illinois.  They had been moving around.  Morris, 16, recorded his birthplace as Ohio.  The birthplace of Lewis, 11, would be variously given over the years as Kentucky or Minnesota.  Joseph, only a baby, had been born in Illinois.   Ten years later the family had fetch up in St. Louis,

Missouri,  Rebecca had died and Sam had retired at age 55.  Both Morris, 26, and Louis, 21, were working as clothing salesmen.  As yet there was no hint of what was to come.

During the following decade the family made one last move, east from St. Louis across Illinois to Chicago.  In 1891 Morris and Louis established a wholesale liquor firm they called Rosenfield Bros. & Company, with Morris as head of the operation.   Almost immediately the brothers launched the Sunny Brook brand of whiskey and within a year were selling it nationally.  Initially they drew their whiskey stocks from J.B. Wathen & Bro. Company in Louisville and also had a financial stake in the J. G. Mattingly & Bro. distillery in the same city. 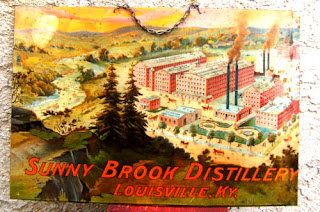 As with other major whiskey distributors, they soon found maintaining steady, quality supplies of liquor required direct ownership of distilleries.  During ensuing years they purchased two Louisville distilleries that had been operating under the same roof.  One, known officially as RD #5 became the Sunny Brook Distillery and the other,  RD #297,  was  the Willow Creek Distillery.  The Rosenfields reputedly paid $1 million for the facilities.  At the time the two plants were mashing 3,400 bushels of grain daily and had fifteen warehouses with a aging capacity for 200,000 barrels.  The Rosenfields featured the distilleries, both exterior and interior,  on promotional materials.

Now with a greatly enhanced and assured supply of product,  the brothers issued a variety of brands in addition to Sunny Brook.  The labels included “Associated Bourbon,”   “Bellwood,” “Brightwood,”  “Equality,”  “Gladstone,” “Kentucky Comfort,” “Royal Blue,” “Sun Beam,” and “Willow Creek.”   But it was Sunny Brook Whiskey that was merchandised most vigorously by the brothers, who displayed a definite genius for advertising.  The 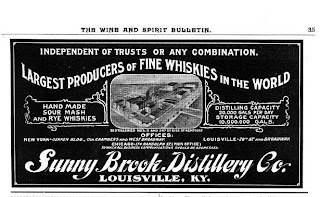 form of their genial “Inspector,” with his blue uniform and white mustache, became a familiar figure to the American drinking public.  He was a fixture on their ads, fancy back of the bar bottles, and giveaway shot glasses.

The Rosenfields were generous with these giveaway items,  particularly to saloons and other establishments stocking their labels.  Among the most interesting was a bar sign that featured a bevy of young women, three of them quite nude, enjoying a swim, perhaps in Willow Creek, but clearly downstream from the Rosenfields’ distillery, visible in the distance.  A second sign, while it also shows the distillery has a distinctly different (not erotic) look.  It depicts an bearded elderly man with a young girl at his knee, with the slogan:  “Age and Purity,” reflecting the growing emphasis in the liquor trade on purity,  a subtle reference to the Pure Food and Drug Act.  The medicinal qualities of whiskey was the theme of another giveaway, a trade card in the shape of a whiskey flask that when opened revealed a “corn plaster,” a cloth coated with an adhesive substance and used to cover cuts or scratches.  The health theme also was echoed on a Sunny Brook wall mounted match holder and striker. 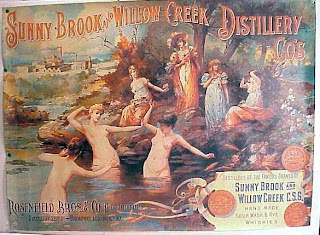 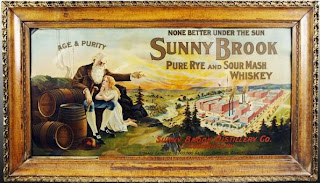 The Rosenfields moved aggressively to expand their Sunny Brook facility by adding extensively to both the still house and warehouses.  By 1904 they claimed to be the largest producers of whiskey in the world.  They declared their distilling capacity had been expanded to 20,000 gallons daily and their warehouse capacity to 10 million gallons.  After several business moves in Chicago, the Rosenfields established their main offices at 174 Randolph Street and opened a New York City office in the Gerken Building at Chambers Street and West Broadway.  For a time they also had a Philadelphia branch office at the city’s Bourse.  Along the way the Rosenfields were also picking up awards.  At the St. Louis Exposition and World’s Fair Sunny Brook Whiskey was given both a gold medal and grand prize. 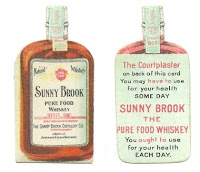 Meanwhile the Rosenfield brothers were leading personal lives.  The 1910 census found Morris, now 55, living on Province Avenue in Chicago, his occupation given as “manufacturer-distillery.”  With him was his wife,  Tillie (in a later census given as Lillie).  She like Morris was the offspring of immigrant parents from Germany.  Ten years junior to Morris, she had been born in Illinois.  With them were three living children,  one son and two daughters.  As an indication of how wealthy Morris had become with his liquor interests, the family could afford six live-in servants, four women and two men.  Meanwhile,  Louis had been living in a hotel at 3009 Michigan Avenue with wife, Julia, and one son and servants.  His occupation was given as “distiller.” Father Sam at age 75 was living in Chicago with a daughter and her husband.

Throughout the early part of 20th Century the liquor trade continued to be lucrative for the Rosenfields.  In September of 1913,  according to a historian, the Sunny Brook distillery shipped 37 full boxcars containing 1,745 barrels of whiskey.  That would translate into  69,293 gallons or more than 840,000 bottles of Rosenfield liquid goods.  Much of this trade,  directly or indirectly, was going into areas of the country that increasingly were going dry but where mail orders were still legal.   The Webb-Kenyon Act passed by Congress the same year put an end to that traffic.

Their business hit hard by that law and other moves toward National Prohibition, the Rosenfields’ enterprise began to falter.  A corporate consolidation was effected in 1914 during which all the brothers’ business properties were incorporated under the umbrella of the Sunny Brook Distillery Co.  Morris was named president;  Joseph, now grown to maturity, became corporate secretary.  Apparently nothing helped.  As fast as the Rosenfields had risen, their fall was just as rapid.   By 1917 the company was in bankruptcy.   When the distillery came up for auction that year, the winning bidder was Louis Rosenfield, apparently unwilling to let go of the family legacy.  For a property once valued at millions, he paid $55,000.  Not long after, however, National Prohibition shut down the Sunny Brook Distillery. 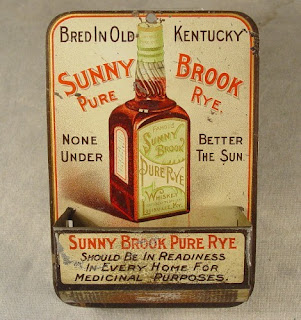 During Prohibition the Kentucky distillery was used as “concentration” warehouse, where stored whiskey was consolidated, kept and bottled for “medicinal use” under the watchful eye of the federal government.   After the death of Louis in the early 1930s, his widow Julia Rosenfield in 1933 sold the distillery for $600,000.   The purchasers were the National Distilling Company,  an offshoot of the infamous “Whiskey Trust.”  This sale was ironic since the Rosenfields frequently had emphasized in their ads their independence of “trusts or any combination.”  National Distilling operated the Sunny Brook Distillery and marketed Sunny Brook Whiskey until about 1975, at which time the plant and warehouses were closed and the buildings ultimately torn down.

Thus ended the saga of Rosenfield Brothers, who rose like a rocket to national prominence as distillers and just quickly as left the scene.  In their wake remain thousands of glass quarts and flasks, back-of-the-bar bottles, saloon signs, shot glasses, match safes, trade cards,  advertisements, and other trinkets to remind us of the heyday of the amazing Sunny Brook Boys.

2 thoughts on “The Amazing History of Sunny Brook Bourbon”