It’s hard to believe that the Kings County whiskey distillery, which was founded in 2010, could be the oldest in New York City. But tough regulation following the cities’ Whiskey Wars and Prohibition Laws kept NYC distilleries underground for decades. It wasn’t until 2002, when New York saw the success of their wine industry, that they created a limited license for small up-state distilleries. When the State expanded the license in 2007, Kings County founders Colin Spoelman and David Haskell saw an opportunity to expand their own bedroom distilling. Originally operating some less-than-legal stills out of their own apartment, the pair transferred their operations to the run-down Brooklyn Navy Yard. Though they had become commercial, the two maintained their true moonshiner style. This is evident in not only the barebones style of each of their bottles, but in the experimental flavours within them. From Brooklyn to MyBottleshop, here’s the cream of Kings County’s crop:

This is a good old-fashioned white lightning whiskey. Unaged and un-pretentious, it balances pure, bright and intense aromatics with a silky mouthfeel. As it was in the days when whiskey was distilled in wash-stills deep in the woods, Colin and David do not chill-filter the final product.  This way, they retain all the malted grain and corn oil characters you can’t get from more manufactured spirits. Even though its incredibly tasty on its own, a little of this white lightning goes a long way in a Bloody Mary. Otherwise, the bottle’s just small enough to stash in your bootleg and take slow sips from. If you’re after a more authentic moonshine, grab a bottle of Kings County Moonshine.

Colin Spoelman, co-founder of Kings County, grew up in a dry county deep down in Kentucky. There the bootlegger was King, as they were the only way for the townsfolk to experience Kentucky’s rich culture of bourbon and moonshine. Taking this tradition to his own distillery, Kings County bourbon is made with organic corn from upstate New York and aged for two years in charred American Oak. From this, the spirit receives notes of spicy cedar, fresh oak and roasted malt in its rich nose. Thanks to the additional 30% barley in the mash-bill, there are flavours of pecan, fresh corn and bright cherry in the palate. Adding to its authenticity, each bottle of bourbon is filled, labelled and sealed by hand. If you’re after a spicy-sweet spirit in the spirit of Kentucky’s bourbon bootleggers, buy yourself a bottle of Kings County Bourbon.

Crafted with cocoa husks from Brooklyn’s legendary Mast Brother’s Chocolate Factory, this fine moonshine macerates the cocoa for two to three months (with no added sugar). The resulting spirit packs a subtle sweetness, with powerful savoury notes of raw cacao nibs. A soft bitterness caps the intense aromas of the palate, clearing your own for the next sweet sip. It can be used to craft an incredible range of cocktails, such as the classic Cocoa Old Fashioned. Otherwise it makes an excellent addition to espresso, and can be enjoyed on its own as an after-dinner drink. If you’re looking for a classy spirit that can satisfy your sweet tooth, try a bottle of Kings County Chocolate Moonshine.

If you’re only after a taste of New York City’s oldest spirit, you can grab the smaller 200 mL bottles right here. Otherwise, if you’re feeling adventurous, we also offer all three in an exclusive Trio Gift Pack. 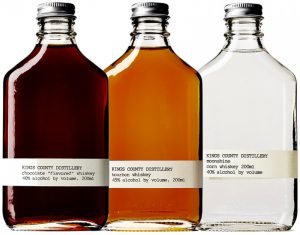