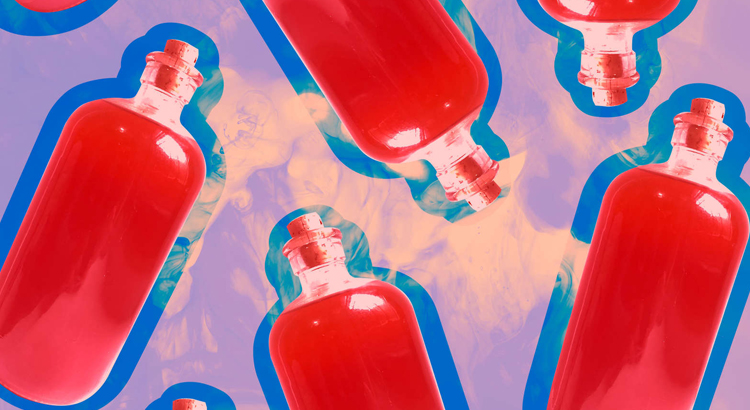 Learn how to make your own aperitivo with tips from Patrick Miller, who started Faccia Brutto after making his own at-home project.

Often seen in stirred-and-boozy cocktails as an aperitif or neatly poured into a glass for after-dinner drinking, amaro is a staple of any home bar cart.

You may recognize bottles like Fernet-Branca, Averna, or Campari, but your new favorite could soon be your own because these herbal liqueurs are incredibly easy to make. In fact, amaro, which means “bitter” in Italian, originated as a medicinal elixir made in the home and has developed into a category of spirits ranging from woodsy or vegetal digestifs to bright and citrusy aperitifs.

I spent the last two weeks researching amaro’s rich history, sourcing expert tips, and finally mixing up my own aperitivo, a red bittersweet liqueur. But if we’re being honest, I spent most of that time checking in on the charming little bottle sitting on my office shelf and anxiously awaiting the day I could stir up a Negroni with my very own creation. It’s an easy, hands-off process and the bottles make a thoughtful holiday gift, so there’s no better time to get started.

What is amaro, anyway?

Before we dive into how to make amaro, it’s important to understand exactly what it is. This stuff can be traced back to ancient Greek and Roman traditions and has been made commercially in Italy for hundreds of years, so you’d think we’d have shored up the definition by now. But think again. Amaro is an herbal liqueur that’s made by macerating bitter barks, herbs, spices, and other botanicals and distilling it down into something that sits at about 16 to 40% alcohol by volume. These days, it is generally divided into two categories: aperitifs and digestifs. Digestifs are the medicinal, ultra-bitter, dark varieties that immediately come to mind when you think of amaro. That minty fernet your bartender friend made you shoot at the bar is an amaro, as is the Amaro Montenegro you sip on after dinner.

But there’s actually much debate about whether the other side of the coin—the aperitivo we’re talking about here—is even an amaro. Aperitivo is the sweet, citrusy thing that makes your Negroni a striking red-orange color and gives it that bitterness you crave. They’re lighter and lower in alcohol than the digestifs you know, and it’s the category that Campari and Aperol fall into. But Brad Thomas Parsons, an expert on all things bitter and the author of Amaro: The Spirited World of Bittersweet, Herbal Liqueurs, says in his book that he was corrected by many Italians who whole-heartedly argue that Campari, and other aperitivos, are not amari, but are instead bitters. But wait, I thought amaro means bitter? Me too, reader. Me too.

“In Italy there’s universal agreement that rather than the ingredients that make up an amaro, the true definition of the word is guided by the act of when you drink it—at the end of a meal,” Parson says in his book. But he also notes that while it doesn’t fall in line with Italian tradition, many Americans and others around the world would call aperitivo an amari “without any hesitation.”

Can you really make it at home?

The short answer is: yes. And making something that tastes delicious is actually way easier than you think. After hitting the books to tackle the history of amaro and reading some online recipes, I tapped Patrick Miller, who runs an amaro company based in Brooklyn called Faccia Brutto to walk me through the process. Miller, who was once the executive chef at Rucola, started his company after making orange bitters as a Christmas gift and falling in love with the product and the process. He had been in my shoes once as a curious home amaro maker, so I knew he’d be my guy.

Let’s start at the beginning. A lot of booze, amaro included, starts with something called a grain neutral spirit. You may know it as Everclear (eeek) but the definition really just covers any overproof spirit. These come in versions with different amounts of alcohol by volume, but Miller said for a good amaro, we should start with 95% alcohol by volume or 190 proof because the super high proof makes for a cleaner extraction of all the flavoring agents we’ll add later.

Once you get your hands on something that would send shivers down your spine if consumed alone, you’ll take this flavorless, colorless liquid, infuse it with flavor, and distill it down into something more drinkable. It sounds easy enough, and the hardest part is determining the blend of herbs, spices, and botanicals you’ll use. Those ingredients make up the elixir’s flavor profile, and the sheer number of options and combinations can be dizzying. I made Miller’s recipe for aperitivo, but one of the things that makes amaro-making is so fun is that you can riff on it, add in new ingredients, and make it your own. “It’s really a trial and error process,” Miller said of recipe development. “But luckily I’ve always been someone who learned by messing up a few times.”

It’s not like you can look at the back of the bottle and see a full ingredient list—plus Italian amaro makers are notoriously secretive about their blends—and when you do hear what’s inside, you may not recognize the names you see. Sure, there’s coriander, which you’ll recognize from your spice rack, but a lot of people may not have worked with gentian root or angelica root before. Some of the ingredients like gentian and wormwood are used as bittering agents; they’ll give your amaro that bracing flavor. Others like star anise, cinnamon, and allspice add a depth of flavor that you can play around with to make your DIY aperitivo your own.

For Miller, it’s important to use the highest quality ingredients you can get your hands on, both to ensure strong flavors and to support a commitment to sustainability. So when he makes his lineup of amari for Faccia Brutto, he sources from Monterey Bay Spice Co., Burlap and Barrel, and Starwest Botanicals—and these stores aren’t just for the pros, you can buy smaller amounts for your own amaro-making journey from them as well.

Once you gather up your botanical mix, making aperitivo is a really hands-off process perfect for those of us who’d rather drink the stuff than work in the kitchen to make it. You’re essentially just making a giant batch of boozy tea. The only thing you really have to remember is when it’s done. “I’ve found that people seem to think the longer you leave it in there, the more flavor you’re going to get,” Miller says. “But there really is a law of diminishing returns after about two weeks.” So gather your ingredients, set a calendar reminder, and let’s get started.

How to make your own aperitivo at home: