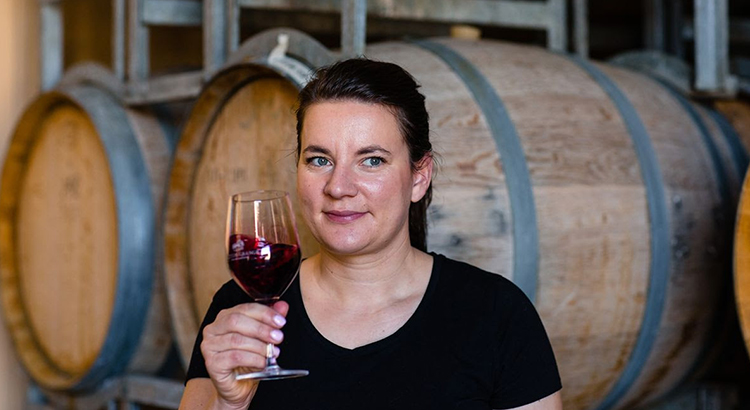 Speaking with Mel from Sutton Grange in late Spring last year, she was heading into a busy bottling period, and getting all her ducks in a row for vintage 2021. A jill of all trades, she was offered the winemaker position as a 26-year-old, and oversees both the vineyard and winery management. A Len Evans Scholar, Gourmet Traveller Wine Young Winemaker of the Year, Young Gun of Wine Finalist and People’s Choice Award for the latter, she naturally exudes a palpable enthusiasm that makes her a superstar for our industry.

She described the scenery at Sutton Grange; gentle hills and outcrops with granite boulders throughout, Ned Kelly country eucalypts – which, for me, evokes a dry and dusty Australian bush landscape – but looking around at the moment, she says, it is healthy, green and lush. Their dam is like an oasis, spilling down over the property and surrounded by the green vineyards.

The rolling foothills of Mount Alexander provide lots of varied aspects, and it appears like the vineyards are looking up to the mountain, a major influence on their particular pocket of terroir. Sutton Grange sits right at the nexus point where three sub-regions meet, and it doesn’t entirely conform to each or any of them. Its unique subclimate on the eastern side of the mountain has it fairly protected from weather from the north-west, and the dam gives the site a significant water source many other properties don’t have (in fact, they have been drought-proof for 2 years.)

The other key to Sutton Grange’s micro-terroir is the influence of granite soils. Same as in Rhône, the decomposed granite bedrock gives a granitic minerality to the core of the wine. The soil is low-nutrient, high-minerality and not very high-yielding. Anecdotally, the influence on Syrah in particular is a mineral tension and energy on the palate unique to the terroir. Stylistically speaking, their Syrah is produced in a medium-body, fragrant Old World way, partially the influence of the former French winemaker and founding visionary of Sutton Grange that has spurred the Francophile in them.

The area is a moderate continental climate and relatively dry with an annual average 600ml rainfall (compared to nearby Macedon with 1100ml). The diurnal variation can be up to 30 degrees between the peak heat during the day and the low at night. This requires varieties that are able to withstand the fluctuation (their hero Shiraz loves being pushed during the day and resting at night.) It’s also well suited to the Mediterranean varieties that Sutton Grange have selected, Fiano, for example, Mel notes that it might not be used to such cold nights but it “absolutely thrives here”, and Viognier grows beautifully on granite as it does in the Northern Rhône with a great ability to express minerality. The cool nights enable the whites in particular to retain their natural acidity. The Mediterranean varieties are planted together in a section of the vineyard on the crest of a hill – of particular note is the Aglianico which was the first in Australia.

The vineyard is farmed organically – Mel believes this is how the best grapes are grown – and is rightly treated as its own ecosystem with sustainability at the core of their management of the property.

Mel came to Sutton Grange with experience in Central Victorian wine from Seppelt, and she has honed her knowledge and organic philosophy to craft distinctive and delicious wines here with a clear and true sense of place for this unique setting. We’re thrilled to be able to share them with you.