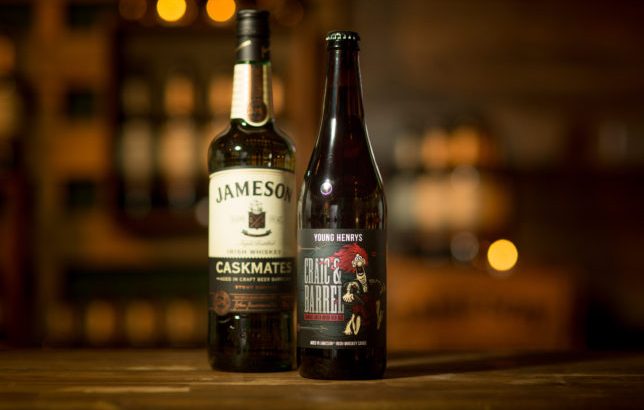 Following their 2016 collaboration bringing special boilermakers to the country, Newtown craft beer wizards Young Henrys and iconic Irish Whiskey Jameson have once again joined forced to launch a very exclusive, limited edition beer this week. Going by the name of Craic & Barrel, the new brew is an Irish Red Ale that has been aged in Jameson Irish Whiskey casks, taking on a unique oaky flavour profile that links the wide worlds of craft beer and quality spirits.

The Craic & Barrel brew that has been debuted as Young Henrys was taken from seasoned Jameson Irish Whiskey barrels which were shipped from Ireland to Newtown (NSW) with the beer marinating in the malty flavours and taking on the character of the famous Irish whiskey.

The limited release ale was released at the Opening Night Gala of Sydney Craft Beer Week 2016. The launch was hosted by Young Henrys co-founder Oscar McMahon and special guest, Jameson Head Cooper Ger Buckley who will be deconstructing, re-building and charring barrels.

“We share Jameson’s passion and dedication towards top quality craftsmanship of the ideal drop”, said McMahon. “We also share their love of working with interesting people and trying to have fun while doing it. This project has created new friendships, has been a lot of fun and has resulted in a pretty special beer! I can’t wait to get it into people’s hands”.

Only 1,500 bottles of the Craic & Barrel Irish Red Ale have been made available, with the public now able to grab the brew from Young Henrys in Newtown as well as a small number of select venues in Sydney’s inner-west, including Marrickville’s MyBottleShop.com.au.