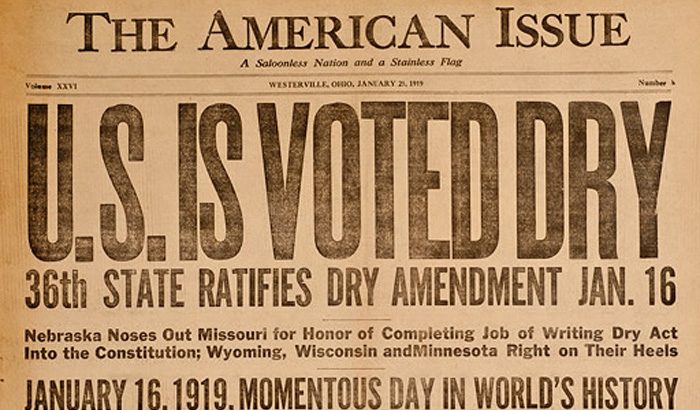 Prohibition had a devastating effect on the Whiskey industry in Kentucky. Distilling properties were significantly devalued before the legislation was enacted, because of the growing strength of the Prohibition movement. Prior to 1920, there were over 180 distilleries in operation in Kentucky. The major Kentucky counties with operating distilleries pre-1920 included Nelson with 23, Jefferson with 23, Bourbon with 17, Anderson with 12, Franklin with 10, as well as other distilleries distributed throughout an additional 26 counties. The profound impact of Prohibition on the Whiskey industry meant less than half of these operations survived.  After legislation was enacted prohibiting the sale of alcohol, many bourbon distilleries sold their equipment to Canadian operations or for scrap. A few distilleries, such as the Glenmore Distillery in Owensboro, experimented with vinegar and industrial alcohol production, although most efforts were unsuccessful.  Most of Kentucky’s small operations were dismantled or vastly altered for other purposes. Thousands of distillery workers were laid off, reportedly up to 6,000 – 8,000 in the Louisville area alone. Also, an extremely important source of Kentucky’s state tax revenue had vanished.

Although Prohibition was the crucial determining factor in the downfall of most distilleries in the state, a handful of operations were able to survive, or at least recover and reopen during the Post-Repeal era. Two major factors contributed to the viability of some distilleries that were able to continue operating through the Prohibition years. These include The Liquor Concentration Act of 1922 and a provision for the medicinal trade. The Concentration Act facilitated government oversight of Whiskey stocks by concentrating them in select warehouses. At the beginning of Prohibition, whiskey was held in approximately 800 bonded warehouses nationwide. However, by September of 1922 most of the whiskey reserves had been transferred to warehouses in Kentucky, such as in Louisville and other prominent locations.

Another major factor that contributed to the viability of some distilleries during Prohibition was the medicinal trade. Traditionally, whiskey was one of the few readily available antiseptics and painkillers available to average Americans. At the time Prohibition went into effect, physicians had already been using whiskey as a stimulant to fight influenza, which became a major concern due to high mortality rates in 1918. During Prohibition 26 states-including Kentucky-sanctioned whiskey as a prescription for medicinal purposes.

Like the Pepper operation, many distilleries in Kentucky had been marketing their whiskey for medicinal purposes since the late nineteenth century. As early as 1890, Pepper had been marketing his whiskey by advertising that the Old Pepper brand could treat malaria, consumption, and other maladies. By the 1910s, the distillery was placing advertisements with drug stores for medicinal sales.  Along with the Pepper operation, the George T. Stagg Distillery and the Glenmore Distillery were also producing whiskey for medicinal purposes during Prohibition.  Each of these operations was able to continue production – selling their whiskey and marketing their brands despite the virtual destruction of the distilling industry as a whole. During this period, Pepper whiskey stocks along with left over stocks from other smaller distilleries were bottled for the sole purpose of medicinal use. The Pepper operation was in a select group of central Kentucky distilleries to maintain brand