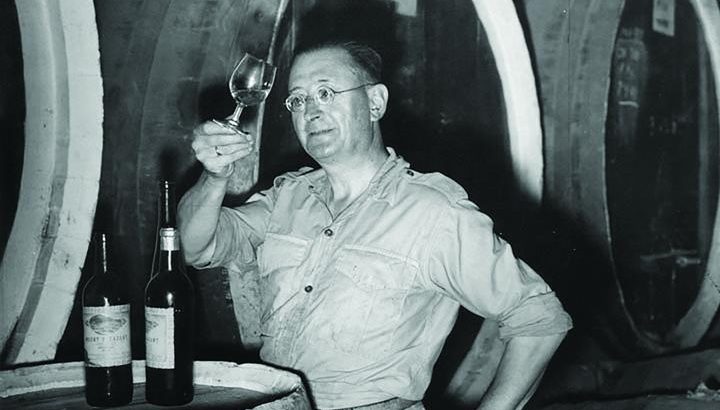 The name Mount Pleasant conjures up all kinds of bucolic images. But when this Hunter Valley vineyard was named almost a century ago the region was far from the tourist destination it is today. While no doubt beautiful, the original Mount Pleasant vineyard was a long, slow and dusty journey from Sydney, in a place marked by baking hot Summers.

The property was named and settled by young winemaker Maurice O’Shea.  His mother picked up the small vineyard already forty years old, planted in 1880 and one of the oldest in the Hunter Valley, which Maurice extended. O’Shea though was not an archetypal Australian winemaker of the day – more a renaissance man ahead of his time.

O’Shea’s father founded the New South Wales Wine and Spirit Company in 1896 importing the great wines of Europe to sell in the burgeoning colony. No doubt Maurice had heard about and tasted many fine wines growing up – an education that would continue when in 1914 he moved to Paris to firstly complete his secondary education, before studying oenology in the beautiful medieval Southern French town of Montpellier.  O’Shea returned to Australia taking the reins at Mount Pleasant where he would forge a reputation as one of the fathers of premium Australian wine.

O’Shea bought experience and technical knowledge to Australian winemaking that was hardly known at that time. While most winemakers would blend together all their plots to produce a single vintage, O’Shea would separate outstanding parcels from around the Hunter Valley and meticulously blend them in order to craft unique styles, often in tiny volumes. Some were from his own vineyards while others were from well renowned regional growers such as the Tullochs and Tyrrell’s. Practically unknown today O’Shea would also occasionally add Pinot Noir to his Shiraz to give his wines their characteristic softness.

Without the benefits of modern winemaking nor electricity Maurice was also inventive – adding blocks of ice to ferments so as to cool them during hot Summer spells to stop the hard-working yeasts seizing up under the stress. Many of his techniques though are lost with the notebooks detailing his exact methods mysteriously disappearing soon after his death. Hunter winemakers to this day would still dearly love to know those secrets as some of the best O’Shea wines are still drinking beautifully at over 50 years of age.

The wine trade, though, has always had its fair share of dreamers – proprietors lost in their passion for the crafting of fine wine, and O’Shea was one of those. He also had the misfortune to be creating exceptional table wines when fortified wines were all the rage. The difficulty in selling his wines was compounded by the Great Depression and then World War 2. In 1932 the McWilliams family bought half of Mount Pleasant before taking full ownership in 1941. It could have been the end of O’Shea’s links to Mount Pleasant but he was retained as Chief Winemaker where he went on to complete his finest work, both in and out of the winery.

O’Shea was not only a gifted winemaker but he also had an eye for great vineyard sites. Some much needed capital from McWilliams allowed Maurice to broaden the Mount Pleasant vineyards away from the original Old Hill and Old Paddock with the addition of the Rosehill and Lovedale sites.

Located within eyesight of one another O’Shea had picked out vineyards that would grow to be regarded as some of the best in the Hunter Valley and far beyond. While the Lovedale vineyard draws much acclaim for its long-lived Semillon, the Rosehill vineyard stands out as a truly miraculous site – an isolated gently sloping  hill across the road from Lake’s Folly blessed with volcanic soils, and first planted by O’Shea in 1946.

Unfortunately O’Shea never got to see Rosehill in full flight – he died from cancer in 1956. Since that time, and despite not always receiving quite the attention that it deserves, Rosehill has still produced many memorable bottles of wine, stretching back to 1959, with more recent vintages such as 1991 also a standout.  Never overly sturdy and dense, as the Old Paddock and Old Hill can be, the best Rosehill Shiraz is a picture of elegance and understated strength, delicious in its supple drinkability yet with plenty of staying power. While not one of the Hunter Valley’s most famous wines it is one of the very best and a living tribute to the genius of Maurice O’Shea.

One thought on “The Pleasant Mountain”