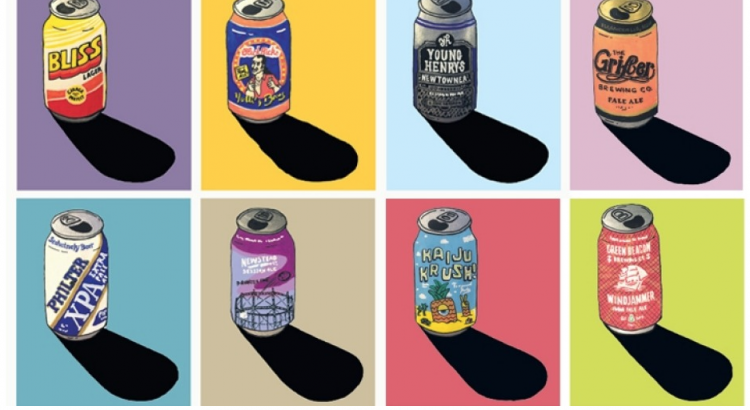 Recently the Sydney Morning Herald held a Marathon “Tinnie Tasting Test”.  The “Herald”  grabbed a whole stack of canned beer including both craft and factory made beers. It seemed like an ambitious task and in the end it was as the SMH’s crew couldn’t get through the mass of tinnies piled in front of them.  We have to say though the team of tasters made a great choice is picking the locally made Grifter Pale Ale as the top of the pile.  It’s a great beer and one the whole team here at MyBottleShop enjoys cracking the ring pull off!

Dowling: There’s mandarin on the nose. A bit of warmth and sweetness too.

Jemima McDonald: It sure does have a bacon quality about it. Smoky but light.

Pereira: It’s on the lighter side but still has great body and character.

Jemima McDonald: Hell yeah. I dig the toffee notes and light bitterness at the finish.

Dowling: It’s quite malty and chewy.

Pereira: Yep, it’s very chewy. The massive bitterness lowers the drinkability for me.

Wilson: There’s pine cones on the nose and an Aperol sweetness too.

Jemima McDonald: It’s quite floral on the nose but a little too bitter for me. I can appreciate it but probably couldn’t enjoy a whole can.

Jordan McDonald: A really nice ale, properly balanced. There’s a bit of mango about it.

Jemima McDonald: I think it’s a nice, light ale. Golden honey flavours. I like it! Sweet and approachable.

Jordan McDonald: Complexity is low. It’s a bit too sweet for me. But, yep – super fresh.

Wilson: Yes, it is quite bitter, but kept in balance. There’s a sweet middle.

Cameron: It lacks a bit of finesse, but, yep – this is a good beer.

Dowling: Yep, it’s quite airy and fizzy in good way.

Pereira: I feel this beer was designed to be very, very smashable.

Wilson: There’s a bit of underripe mango on the nose.

Dowling: It’s super tropical and has a nice natural flavour. I wouldn’t be happy drinking a pint of it though.

Bennie: It’s definitely another one you want to drink icy cold in the park.

Jemima McDonald: All beers should be judged by how good they taste in a park, really.

Jordan McDonald: You don’t see many of these Celtic red-style beers anymore.

Jemima McDonald: Someone actually made an Anzac biscuit beer years ago and it’s what got me liking beer in the first place.

Cameron: This is a big beer.

Bennie: Yep. That would definitely stop me in my tracks after one.

Pereira: I don’t like this new fruit-driven pale ale trend where the flavours taste artificial.

Jemima McDonald: Sure, it tastes artificial but I don’t hate it.

Pereira: It still works because, unlike the creaming soda tinnie, where you only have three seconds of beer on the finish, this one actually tastes like a nice tart, sour beer.

Wilson: However, if we unveiled this and it was a pale ale it would be massively, massively faulty.

Bennie: That’s always the way with wine judging too. You can be like “this is the best skin-contact pet-nat I’ve ever tried!” and then you unveil it and go “oh, right – it’s Jacob’s Creek”.

Bennie: This is super clean.

Pereira: Most of the dark beers we’ve had today have been really sweet or really dry and this is balanced so well in the middle.

Wilson: Colonial’s [wide-mouth] cans are good for getting aroma from the beer without pouring it into a glass, too.

Pereira: I love the super wide-mouth cans – Bentspoke Brewing in Canberra also use them. Although it can be weird drinking from a can where you can see all the beer at once.

Jemima McDonald: From a sales point of view, everyone loves the wide-mouth cans because they’re a novelty.

Jordan McDonald: I don’t dig how trend-driven the beer released by most breweries have become. New England India Pale Ale (NEIPA) styles are selling well, so now everyone has to do one.

Pereira: And remember when black IPA was a thing? Anyway, I enjoy this style of beer but I’m not looking for complexity.

Cameron: If NEIPAs are what punters want to drink over the next 18 months then it can be difficult for a brewery to resist making one – it’s still a business at the end of the day.

Cameron: Yep. This is a really seamless, well-made beer.

3. Law of the Tongue Oyster Stout

Dowling: Wow. Smoky. And surprisingly sweet at the same time. I want to sit by a fire and drink this. I love it.

Bennie: High drinkability. You could smash this.

Pereira: That’s what makes this beer so good. This style is normally something you can only enjoy in small measures.

Bennie: I think people forget that’s what Guinness does best too. Everyone’s like, “gross – steak in a glass – you can’t drink one without getting full”, but that’s not the case at all. You would get fuller drinking VB than this.

Wilson: The drinkability of this is really high.

Pereira: I recognise this beer. It’s the last beer I actually bought a case of.

Jemima McDonald: This is the one beer I would be able to drink a lot of. It’s not bitter and leans towards the fruitier side of things.

Wilson: This is just a beautiful, fruity, fresh, in-your-face beer.

Dowling: There’s flavour, but it’s not too fruity or hopped to the point where it’s annoying to drink.

Dowling: It’s so on the mark. Light and crisp and they’ve nailed the carbonation. This is an every-person’s beer for every occasion – pub, home, park or on the road. It’s not just a beer drinker’s beer.