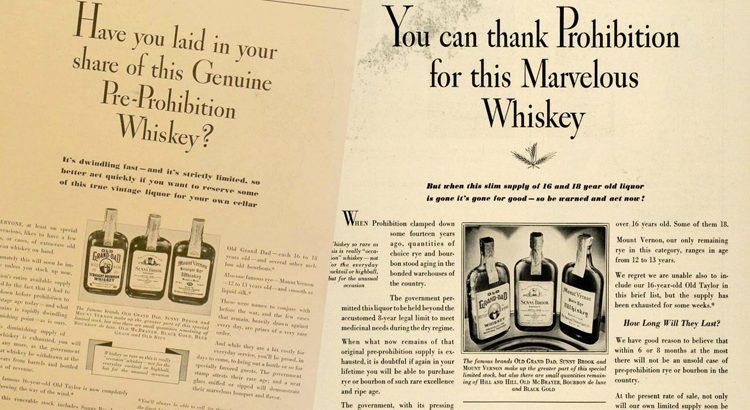 Ok to cut a long story short and then… go into the loooong story.  A pre-prohibition (or pre-pro for short) bourbon is Bourbon brand that existing before prohibition started in the United States in 1919.  The bourbon label is still considered pre-pro even if it was actually produced post prohibition as long as the label and the bourbon was in existence before 1920.  An example of a pre-pro bourbon that is still available today is James E Pepper bourbon and James E Pepper Rye Whiskey.

By the beginning of the nineteenth century bourbon distilling was already a flourishing industry in Kentucky. As early as 1810, approximately 2,000 distilleries were operating in the state, and approximately 140 were located in and around Lexington, Kentucky. Due to limitations in transportation and expenses, the distiller’s market area was restricted to his immediate vicinity. Whiskey sales were generally influenced by local considerations, such as word-of-mouth reaction to the product and the general perception of the distiller’s reputation. It did not escape early distillery owners that their brand’s success could be enhanced by attaching the term “Old” to their product. That term referred not only to aged whiskey, but implied the distiller’s longevity and experience. The term “Old” became a major component in promoting the quality and longevity of Pepper products.

As advances in transportation, such as the growth of steamship and railroad networks, allowed for greater distribution of bourbon by the mid-nineteenth century, economic concerns increased from the implementation of the Internal Revenue Act of 1862. This act imposed a temporary excise tax on distilled spirits, causing the closure of smaller distilleries in the state. However, larger, commercial distilleries developed, primarily after the Civil War, establishing bourbon distilling as a statewide industry with a larger market beyond Kentucky’s borders. During this era, known as the first “Golden Age of Distilling,” several distilleries in Lexington and its vicinity were established or reorganised as national distilleries, including the Ashland, Commonwealth, Silver S~rings, Woodland, Lexington, and Henry Clay (on the site of the James E. Pepper distillery) distilleries.

The bourbon industry in Kentucky prospered through the mid- to late-nineteenth century, but near the end of the century, distillers experienced financial difficulties because of the overproduction of whiskey. By the 1890s, numerous distilleries ceased operation. The Pepper Distillery was one of the few operations in Lexington to survive through this period. A 1934 Map of the Lexington area indicates the Jas. E. Pepper & Co Distillery was the only distillery in operation by the end of Prohibition. The following lists many of the other local distilleries that had less success:

Because of the perceived overindulgence of liquor consumption, several temperance movements were started in the United States in the early to mid-nineteenth century. These groups were particularly active in the early 1830s, and legislation was enacted to regulate the whiskey industry by taxation. Largely forgotten during the Civil War, the pursuit to regulate the industry became strong once again by the late 1860s. By the late 1910s temperance leagues made a considerable impact on the decline of whiskey consumption, and as a result of these temperance movements, along with economic factors, the 18th Amendment was introduced by the United States Congress in 1917 and eventually ratified in January, 1919. Recognising a need for legislation to enforce the 18th Amendment, the National Prohibition Act was introduced by Representative Andrew J. Volstead of Minnesota and passed by Congress in October, 1919. Over President Wilson’s veto, the National Prohibition Act (also referred to as the Volstead Act) was enacted at 12:01 a.m. on January 20, 1920, thereby prohibiting the transport, sale, barter, trade, manufacture, delivery, and possession of intoxicating liquors.  Damn, big mistake!