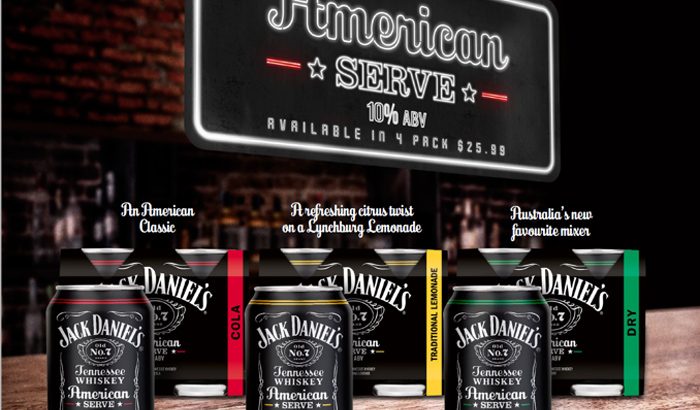 Dark Spirits in the form of whiskey and rum account for 81 per cent of the $2.3 billion Australian Ready to Drink (RTD) Category Market and are the fastest growing segment within this category.

In line with this growth, Natalie Accari marketing manager Jack Daniel’s Family of Brands, said the team has looked into their brand to give Australian consumers more of what they love about Jack.

“That’s where the simplicity and authenticity of our newest addition to the family became clear. For us, there is nothing like the feeling of being at a bar in the USA and ordering a Jack Daniel’s. The hospitality is great and US bartenders tend to favour just a splash of mixer to cut the whiskey, that’s the authentic taste and feeling we are bringing to Australian consumers through Jack Daniel’s American Serve.”

Jack Daniel’s American Serve has a 10 per cent ABV and comes in a short 250ml can which can be poured over a rocks glass filled with ice to replicate an authentic American pour. It is available in three flavours: Cola; Traditional Lemonade; and Dry.

Accari continued: “The real beauty of American Serve is that it offers Australian spirit consumers more of the smooth, bold flavour of our iconic whiskey, with less mixer, while remaining a responsible, measured choice.”

American Serve is available from MyBottleShop Australia’s #1 Online Drinks Shop during September 2016 with an RRP of $25.99 for a four-pack.